Postgame: Inside the UVA locker room after 24-19 win over Pitt

Highlights from the postgame interviews with UVA coach Mike London and Virginia players following the Cavs’ 24-19 ACC win over Pitt.

UVA outgained heavy favorite BYU by 183 total yards, had 19 more first downs and had the ball for more than 40 minutes, but the Cougars escaped with a 41-33 win on Saturday in Provo, Utah.

The UVA quarterback situation is still officially unsettled. The depth chart for Saturday’s game at BYU has Greyson Lambert and Matt Johns listed at #1 at quarterback.

UVA football coach Mike London talks with reporters after the Cavs’ 23-21 upset win over #21 Louisville on Saturday in Charlottesville, Va. 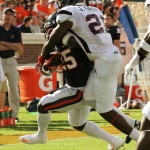 UVA quarterback Matt Johns talks with reporters after the Cavs’ 45-13 win over Richmond on Saturday.

UVA football coach Mike London enters this week still not having made a decision on who his starting quarterback will be for the Cavs’ Week 2 matchup with Richmond.