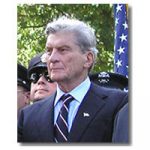 While the chattering class has nattered over the Palin Effect in this month’s elections, less mentioned has been the Warner Effect. That is because, first, it affects Virginia. Venture outside the Commonwealth and even Democratic Convention-watchers might say, “Warner who?” As well, we Virginians have gotten rather used to Mark as well as John. The […]

Column by David Reynolds I will never forget what the elephants failed to remember. In Buena Vista on Labor Day 2007 I was having my usual breakfast with them at the downtown American Legion Hall. There was no tribute! But up the hill at the high school where the donkeys were meeting a tribute was […]

Compiled by Chris Graham freepress2@ntelos.net LOSER: Jeff Frederick and the right to vote The guy whose aim seems to be to sink the Republican Party of Virginia to the bottom of the Chesapeake Bay was at it again this week. “This might not be illegal, but it sure stinks to high heaven. Is this really […]

The Top Story: Obama and coal

The Top Story by Chris Graham freepress2@ntelos.net A funny thing happened on the way to me writing the story about how out of touch Barack Obama is on the Southwest Virginia coal industry. Turns out that he’s not. “The truth is that if Sen. Obama has his way, and we impose these massive new taxes […]