The UVA women’s soccer team received a No. 2 seed in the 2014 NCAA Tournament and will open play at home on Friday as it hosts High Point. 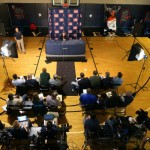 UVA basketball coach Tony Bennett talks with reporters at a media day event in the practice gym at the John Paul Jones Arena in Charlottesville, Va., on Wednesday. 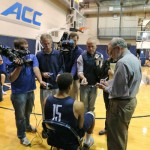 Tickets on sale for UVA-Ohio State wrestling meet at JPJ

Tickets are on sale now for the UVA-Ohio State wrestling match, which is scheduled for Monday, Nov. 24, at John Paul Jones Arena. The dual starts at 7 p.m.

Single-game tickets for the UVA men’s basketball home games against Duke (Jan. 31) and Louisville (Feb. 7) at John Paul Jones Arena are sold out. Fewer than 300 tickets remain for the Cavaliers’ match-up with Virginia Tech (Feb. 28).

The family of missing UVA student Hannah Graham issued a statement Saturday pleading with the public for any information as to the whereabouts of their daughter, who went missing in the early-morning hours of Sept. 13.

Forensic evidence collected in the ongoing investigation into the disappearance of second-year UVA student Hannah Graham shows a link between that case and the 2009 disappearance and murder of Virginia Tech student Morgan Harrington.

Charlottesville Police Chief Tim Longo said today at a press conference that there are clear similarities between the case of missing UVA student Hannah Graham and the 2009 disappearance of Morgan Harrington.

TNA TV taping draws 425 fans to Charlottesville: What that means for business

The John Paul Jones Arena in Charlottesville, Va., has a seating capacity of 15,600. TNA drew a reported 425 fans to the arena last week for a taping for a One Night Only pay-per-view.

The Virginia athletics department will host Meet the Teams Day at John Paul Jones Arena on Sunday, Aug. 17. Admission for this annual preseason event is free and open to the public.

The UVA football team’s first three practices of the fall will be open to the public. The practices are scheduled for Monday, Aug. 4, Tuesday, Aug. 5 and Wednesday, Aug. 6.

The UVA athletics department would like to invite the public to celebrate the 2014 Virginia baseball season with the team on Thursday, June 26 from 6-7 p.m. at Davenport Field. Admission and parking for this event are free.

Season tickets for 2014-15 UVa. men’s basketball home games will be on sale beginning Wednesday, June 4 at 9 a.m. for customers renewing their tickets and new buyers.

The first pitch for the Saturday (May 10) game of the UVa.-Georgia Tech baseball series at Davenport Field has been moved to noon. The game originally was scheduled to begin at 4 p.m., but a threat for inclement weather has prompted the change.

The UVa.-Radford baseball game, scheduled for 6 p.m. Tuesday (April 15), has been cancelled because of inclement weather. In that game’s place, #1 Virginia will play William & Mary at 6 p.m. Wednesday (April 16) at Davenport Field.

The second-ranked UVa. baseball team begins a seven-game homestand this weekend as it takes on No. 14 Clemson at Davenport Field. The series begins at 6 p.m. Friday, followed by a 2:30 p.m. Saturday matchup and the series finale at 1 p.m. Sunday.

With a number of home UVa. athletics events this weekend, fans should be aware of the parking options available for home events on Friday, April 11 and Saturday, April 12.

UVa. coach Tony Bennett talks with the media after the Cavs’ clinched the ACC regular-season basketball title with a 75-56 win over #4 Syracuse on Saturday at the John Paul Jones Arena in Charlottesville, Va.

A 20-5 UVa. run midway through the second half broke open a close game, and the Cavaliers were cutting down the nets in John Paul Jones Arena as ACC champs at the end of a convincing 75-56 win over fourth-ranked Syracuse Saturday in Charlottesville, Va.

﻿The day that UVa. basketball fans have been waiting on for months is here. #11 UVa. (24-5, 15-1 ACC) hosts #4 Syracuse (26-2, 13-2 ACC) today at 4 p.m. The Virginia-Syracuse game will be televised by ESPN and online at WatchESPN.com. The game will be broadcast on the Virginia Sports Radio Network, ESPN Radio and Sirius (Channel 91) and XM (Channel 91) satellite radio stations.

The Friday (Feb. 28) UVa.-Monmouth baseball game, originally scheduled for 3 p.m., has been postponed. The game now will be played as part of a doubleheader Sunday (March 2) beginning at noon. 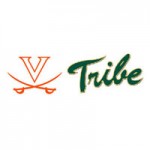 The UVa.-William & Mary baseball game, originally scheduled for 3 p.m. Tuesday, has been moved to 4 p.m. Wednesday (Feb. 19) because of field conditions.

It’s hard to imagine at UVa., where the student section still yells “Not gay!” at a key moment of the school song, right after the words, “We come from Old Virginia, where all is bright and gay,” that our Smile and Smooch Cam will anytime soon feature an actual same sex couple.

It had been a while since anybody has given UVa. a game on its home court at the John Paul Jones Arena in Charlottesville, Va.

The UVa. men’s basketball game against Notre Dame on Saturday, Feb. 22 at 2 p.m. at John Paul Jones Arena is sold out. The sellout marks Virginia’s fourth of the season and most since selling out seven contests during the 2007-08 season.