UMBC guard Wayne Sparrow poured in 15 of his 20 points in the second half to lift UMBC to a 58-53 win over Longwood Sunday afternoon at RAC Arena. 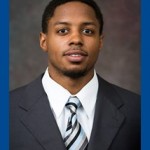