On Saturday, volunteers will unite in a one-day tire cleanup focused on the James River between Howardsville and Scottsville. 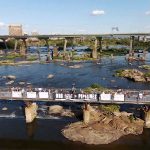 The Virginia Water Solidarity Banner was lifted over the James River Friday evening by over 40 water protectors as part of a no pipelines direct action.

Volunteers will take part in a one-day tire cleanup on Saturday, Oct. 1., focused on the James River between Howardsville and Scottsville.

A joint proposal submitted by the James River Association and Chesapeake Conservancy will receive funding from the National Fish and Wildlife Foundation to reduce sediment and nutrient runoff to improve water quality in the James River watershed as part of the Envision the James initiative.

How do you River? That’s the question at the center of a new campaign that launched today from the James River Association, the Virginia organization dedicated to promoting the protection and enjoyment of America’s Founding River.

A group of Indigenous women are leading a 340-mile, 12-day Nibi Water Walk along the James River on Monday to honor the river and pray for its health.

Through a Virginia Department of Forestry grant, the James River Association is partnering with the Chesapeake Conservancy and the Sisters of the Blessed Sacrament to enhance and restore the riverfront along the James River at St. Francis/St. Emma, also known as Belmead, in Powhatan.

Governor Terry McAuliffe joined officials from the city of Hopewell and other partners today to break ground for an innovative project that will significantly improve water quality in the James River, and ultimately the Chesapeake Bay.

Governor Terry McAuliffe announced today that Virginia has awarded about $21.5 million in grants under the Stormwater Local Assistance Fund.

The JMU women’s soccer team had its season come to an end Friday night in the semifinals of the Colonial Athletic Association Tournament with a 4-3 loss to Hofstra.

The James Madison women’s soccer team locked up the No. 2 seed in the upcoming Colonial Athletic Association tournament Sunday afternoon with a 1-0 win over Elon in overtime at University Park on Senior Day.

The James Madison women’s soccer team earned a key 1-0 victory over William & Mary Friday night at University Park to move into second place in the Colonial Athletic Association standings with one game to play.

The James Madison women’s soccer team recorded its second shutout in a row with a 2-0 victory Sunday afternoon over UNCW at University Park, moving to 9-6 overall and 4-1 in Colonial Athletic Association play.

The James Madison women’s soccer team dropped a 2-0 decision Sunday afternoon on the road against Northeastern at Parsons Field. The loss is the first of Colonial Athletic Association play in 2014, dropping JMU to 2-1 in conference action and 7-6 overall.

Warner, Kaine respond to proposed rulemaking on crude by rail

U.S. Sens. Mark Warner and Tim Kaine yesterday joined hundreds of stakeholders in responding to the Department of Transportation’s (DOT) request for public comment on new rules it has proposed related to transport of crude-by-rail.

The James Madison women’s soccer team fell 4-2 in its final nonconference match of the 2014 season Sundayafternoon against Richmond at Robins Stadium.

The JMU women’s soccer team dropped a hard-fought 1-0 match Sunday afternoon on the road against UNCG at the UNCG Soccer Stadium.

The Virginia Department of Health announced Friday that a portion of the James River will be opened to harvesting shellfish effective September 20, 2014.

The James Madison women’s soccer team dropped a 2-1 decision to La Salle Sunday afternoon at McCarthy Stadium, falling to 4-3 on the 2014 season.

The James Madison women’s soccer team dropped its second match of the season Fridaynight, falling 3-0 at the Higgins Soccer Complex on the road against Villanova.

The James Madison women’s soccer team bounced back from its first loss of the season two days ago to shut out in-state rival VCU 1-0 on Sunday night at University Park.

The 24th-ranked James Madison women’s soccer team suffered a 1-0 defeat Friday night against Navy for its first loss of the season.

Despite strong opposition from landowners and the citizens of Virginia, Governor Terry McAuliffe made statements today in support of the Atlantic Coast Pipeline proposal, previously the “Dominion Southeast Reliability Project.”

Motorists should be alert to road and/or lane closures and possible delays as crews under contract to VDOT perform regularly-scheduled safety inspections at the locations listed below, weather permitting.

Today, Governor Terry McAuliffe announced the creation of the Commonwealth’s Railroad Safety and Security Taskforce. The announcement follows the April 30 derailment of a CSX train carrying crude oil shipped from the Midwest to Yorktown.

Virginia’s Tidewater region — where the Chesapeake Bay, the James River, and the Atlantic Ocean meet — is home to the largest concentration of military bases and facilities in the world.

Gov. Bob McDonnell on Monday announced that the state has begun an operation to mine fossilized oyster shells from beneath the James River as part of the largest oyster replenishment initiative in state history.