Although the Norfolk State men’s basketball team, from an outside perspective, may have a significant amount of concern, the coaching staff is confident there will be little to no drop-off after losing the winningest senior class in Division I history. 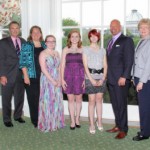 This year, the personal injury law firm of Allen & Allen received over 400 scholarship applications from high school seniors throughout the Commonwealth of Virginia.

The No. 1-ranked UVa baseball will play of pair of midweek games this week, traveling to VCU for a 7 p.m. Tuesday game at The Diamond in Richmond and playing host to Richmond at 6 p.m. Wednesday at Davenport Field.

VMI head coach Sparky Woods today announced the signings of the 2014 football recruiting class. The group features 14 signees including nine that are defensive players. Eight come from the state of Virginia, and six from out-of-state. Six states are represented in this year’s signing day class.

The UVa. Fralin Museum of Art announces the winners of Writers Eye 2013. The Writer’s Eye program challenges writers of all ages to use visual art as inspiration for the creation of original poetry and prose.

VMI baseball has announced 13 early commitments for its Class of 2018, according to information released by the program Monday, Jan. 13. The group includes 11 players from Virginia, who are joined by one each from Florida and West Virginia.