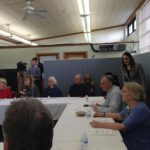 U.S. Sen. Tim Kaine met with a group of health- and senior-service providers Friday at the Waynesboro Senior Center.

Sen. Warner on confirmation of Seema Verma for CMS administrator

Sen. Warner comments after the Senate voted 55-43 to confirm Seema Verma to serve as the next CMS administrator.

U.S. Sens. Mark R. Warner and Tim Kaine announced that they are original co-sponsors of the Women’s Health Protection Act.

The Harrisonburg chapter of Virginia Organizing is calling on Congressman Bob Goodlatte to protect healthcare coverage.

Virginia hospitals to lawmakers: ‘Do no harm’ on healthcare

The Virginia hospital community is advocating a do no harm approach to state legislation on healthcare policy.

New polling from Mason-Dixon Polling & Research shows strong majorities of Virginians are concerned about the future of healthcare.

Sens. Mark Warner and Tim Kaine sent a letter to Speaker Paul Ryan calling for an end to attacks on the nation’s largest women’s healthcare provider.

‘Our First Stand’ rallies set from coast to coast

More than a dozen rallies have been scheduled from coast to coast in a major show of grassroots support for critical healthcare programs.

Medical aid in dying: A hallmark of patient-centered care

The question before us is why is the issue of medical aid in dying gaining so much momentum? And how can we leverage this momentum?

The Harrisonburg Chapter of Virginia Organizing will hold a public demonstration in support of the Affordable Care Act.

Republican members of the Virginia House of Delegates on Tuesday outlined their legislative agenda to reform healthcare.

Healthcare providers, patients, payers, advocates and other concerned residents have partnered to launch the Virginia Coalition to Reform COPN.

HHS will award $17,631,822 in grants for various health care organizations, medical research and Head Start programs across the Commonwealth.

The Dumfries Town Council is calling on the General Assembly to fully accept federal Medicaid funding to provide healthcare coverage for its residents.

Comparing public healthcare in the US and Europe

Some people would like to think that Americans are healthier and better off with their public healthcare system compared to their European counterparts.

The Fenway Institute of Fenway Health released a policy brief showing that gun violence poses a substantial threat to the health of the LGBT community.