The Coastal Plain League announced this week that its teams will compete in eight games versus the USA Baseball Collegiate National Team during the 2014 summer season.

The Virginia Chamber of Commerce, joined by business leaders and Chambers of Commerce from across the Commonwealth, endorsed on Monday a private option approach and released a series of principles to address Medicaid in Virginia. 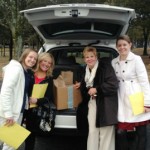 WHSV TV3 staff began their volunteer meal delivery for the Valley Program for Aging Services in the Harrisonburg-Rockingham area on Monday, Jan. 6.

Renovation began this week at the Science Museum of Virginia to install a new digital dome projection system. The project brings a new NanoSeam™ screen and five digital projectors, which combined, will deliver astronomy and giant screen movies like never before.