William and Mary Director of Athletics Terry Driscoll has announced the release of the Tribe’s 2015 football schedule, which is highlighted by five home games at Zable Stadium and a trip to Atlantic Coast Conference foe Virginia.

An old-fashioned shootout was ended on a defensive play in overtime, allowing Liberty to claim a 55-48 victory over Appalachian State, Saturday afternoon, during Homecoming weekend at Kidd Brewer Stadium.

The James Madison men’s soccer team opened Colonial Athletic Association play with a 1-0 victory over No. 21 Delaware on Wednesday night at Grant Stadium in Newark, Delaware. 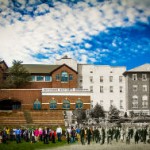 For Eastern Mennonite University’s 100th anniversary in 2017, EMU’s centennial planning committee is soliciting ideas and proposals for special productions of music, theater and the visual arts.

The No. 16 William and Mary football team earned its second consecutive victory with a 29-14 win against Norfolk State in its home opener on a rainy Saturday evening.