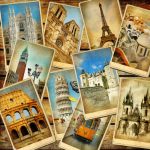 Travelling to Europe after Brexit? News for visitors

People journey because they want to discover other cultures. No other continent in the world welcomes as many visitors as Europe. Americans, in particular, take pleasure in travelling to Europe.

Governor Terry McAuliffe will lead a 13-day trade and marketing mission to Europe from June 18-30, 2017.

The best places to take the kids this summer in Europe

The best way to get the most out of your holiday is to take a trip to some of the best child friendly cities in Europe.

Governor and administration team to embark on European marketing mission

On Monday, June 8th, Governor Terry McAuliffe and officials from his administration will embark on a marketing mission to Europe that will cover six countries in 11 days.

Landau Eugene Murphy Jr., the dreadlocked classic crooner vocalist who won season six of NBC Television’s America’s Got Talent, a $1 million grand prize, and a Columbia Records contract, will be performing in Charlottesville at Paramount Theater, at 215 East Main Street, at 8 p.m.

UVA basketball legend Sean Singletary is offering a series of basketball clinics and coaching opportunities through the Waynesboro YMCA.

Campus events and activities at JMU.

Campus events and activities at James Madison University. From the JMU Office of Public Affairs. For the dates Sept. 12-21, 2014.

Remarks from President Obama at a press conference at the NATO Summit in Newport, Wales, on Friday, Sept. 5.

What the CIA is Trying to Hide

Beginning in the 1990s, and accelerating after September 11, the CIA flew terrorism suspects to secret police custody in Syria, Jordan, Egypt, Morocco, and Libya.

Expanding its pioneering work in the field of focused ultrasound, the UVA Health System has launched the nation’s first clinical trial testing the technology’s potential to treat benign tumors of the breast known as fibroadenomas.