The National Academy of Sciences says climate change poses “the most immediate and important threat to human survival.”

How are farms and farmers dealing with climate change?

Agriculture may well be one of the industries hardest hit by the effects of global warming.

Virginia Tech expert: Why we should care about global climate change policy

President Trump was preparing to announce future plans for U.S. involvement in the Paris Agreement on global climate change.

LEAP presents: Before the Flood at The Paramount Theater

The Local Energy Alliance Program (LEAP) will host a special event on May 25 at The Paramount Theater about climate change.

The effects of climate change are constantly in your newsfeed.

JMU students equipping drone to save historic wall in Colombia

How can a group of JMU students help a doctoral student in Colombia determine the effects of climate change on a wall in Cartagena?

Climate change deniers come in two main varieties: the corrupt and the ignorant.

A panel of influential voices from across Virginia came together Tuesday to discuss climate change and public opinion, and how it shaped the 2016 election. 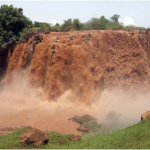 Despite the many disastrous impacts of climate change, there are some regions of the globe that might benefit from hotter temperatures. 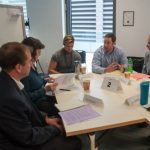 A role-play simulation exercise significantly improves people’s levels of understanding about climate change and how communities can respond.

Climate change denial: What does it say about the corporate culture at Dominion Power?

Everybody has reasons not to want to believe what scientists are saying about climate change. 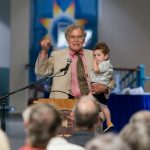 Ray Martin told the audience gathered at EMU Thursday why he had made a generous donation to study and combat the issues of climate change.

How is global warming impacting the world’s penguins?

Not surprisingly, penguins—those cute and quirky flightless birds of the Southern Hemisphere—are in deep trouble as a result of reckless human activity.

A free screening of Catching the Sun is being offered on May 22 at Court Square Theater in Harrisonburg.

No sidelines in fight against climate change

The first Earth Day was intended to be a college campus teach-in. It soon spread to every community and city across the United States.

Climate change poses a risk to people with asthma

The Virginia Asthma Coalition, whose mission is to reduce the morbidity and mortality due to asthma, applauds A.G. Herring for taking action on climate change.

Several local religious communities have come together to launch a weekly prayer vigil at the Virginia State Capitol to call for climate leadership and action.