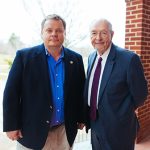 Civil rights activist Bob Zellner is at it again—working for justice and equality.

Ratification of the Equal Rights Amendment was already being hotly debated in the Virginia General Assembly when I became a member of the House of Delegates in 1978.

The restoration of civil rights after completing a sentence is automatic in most states and routine in those that have an application process.

Republicans have retained an attorney to challenge Gov. McAuliffe’s order restoring the civil rights of over 206,000 convicted felons.

Republican leaders called for a special session of the General Assembly to consider the Governor’s “Order for the Restoration of Rights.”

Last week gave me an opportunity to see another of my civil rights heroes, former governor Linwood Holton.

Senator Mark Obenshain issued a statement in response to the Governor’s action to restore the civil rights of over 200,000 convicted felons.

Governor Terry McAuliffe today restored the voting and civil rights of more than 200,000 Virginians who were convicted of felonies.

Civil rights pioneer and former UVA history professor Julian Bond passed away on Saturday after a brief illness. Bond, 75, was a founder of the Student Nonviolent Coordinating Committee, a key organization in the 1960s civil rights movement, and later was a Georgia state legislator, a founder of the Southern Poverty Law Center and president of the NAACP.

Civil rights leader Gardner C. Taylor, a close friend of the Rev. Dr. Martin Luther King Jr., died in March at the age of 96. His death is a poignant reminder to scholars working to preserve the stories of civil rights leaders that time is short.

Five years after the launch of the network, GetEQUAL announced a LGBTQ Bill of Rights, as part of a new “No Asterisks” campaign for full LGBTQ equality.

Hina Shamsi, director of the ACLU’s National Security Project, will be the Friday luncheon keynote speaker at a symposium on the 50th Anniversary of the Civil Rights Act of 1964 and The Voting Rights Act of 1965: An Interdisciplinary Dialogue on Feb. 19-20.

Myrlie Evers-Williams, author, civil rights activist and past chair of the National Association for the Advancement of Colored People (NAACP), will be the keynote speaker for Black History Month at Washington and Lee University.

Selma, and the legacy of Martin Luther King Jr.

Spoiler alert: Selma, in theaters now, ends on a high note, with Martin Luther King Jr. on the steps of the State Capitol in Birmingham, Ala., marking the end of a campaign that pushed Congress to pass the Voting Rights Act of 1965.

On Aug. 28, 1963, Martin Luther King Jr. delivered his impassioned “I Have a Dream Speech at the Lincoln Memorial. Two weeks earlier, a young girl played in the first integrated tennis match on the public courts of Richmond, Va.