Louisville sophomore guard Terry Rozier has been named the Atlantic Coast Conference Basketball Player of the Week, while Duke freshman center Jahlil Okafor was selected the ACC Rookie of the Week for the fourth time this season in a vote by a select media panel.

The Fishburne varsity basketball team suffered its first loss of the season last night in Charlottesville, falling to Covenant 58-55 in overtime.

Virginia Tech turned three Duke turnovers into 17 points, and the Hokies escaped with a 17-16 win in Wallace Wade Stadium in Durham, N.C., on Saturday.

UVA won the ACC title in 2013-2014, return seven of their top nine scorers and add a heralded freshman class. The writers who cover the ACC see the Cavs the same as they did heading into last season.

The third-ranked UVA women’s soccer team clinched a berth in the 2014 ACC Tournament with a 3-1 victory at Duke Thursday night at Koskinen Stadium.

A high shot knocked in at the far post by No. 8 Duke in the 67th minute of play proved to be the difference in JMU field hockey’s 3-2 loss in Durham, North Carolina, on Sunday afternoon.

Interviews with Duke football coach David Cutcliffe and Duke players after the Blue Devils’ 20-13 win over UVA on Saturday at Wallace Wade Stadium in Durham, N.C. 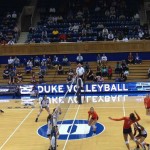 Rivalry? Duke has been the hammer, UVA football the nail

Remember when it was shameful to say that your football team lost to Duke? Entering the 2008 season, UVA football owned Duke, as to that point the rest of the ACC had, with Virginia having won 17 of the last 19 in the series. Which made the 31-3 beatdown that the Blue Devils handed to the ‘Hoos in ’08 so shocking.

The No. 14 UVA men’s soccer team recorded its fourth straight win Saturday, downing Duke 1-0 in ACC play at Klöckner Stadium. The Cavaliers (8-3-1, 3-1-1 ACC) posted their third straight shutout and now have held their opponents for the last 350 minutes of game action.

It wasn’t an easy choice, but Jabari Parker made the choice that most of us assumed he would, declaring on Thursday that he will enter the 2014 NBA Draft, where many analysts think he will be the top pick. 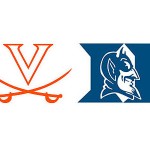 Coach K, Mike Krzyzewski, seemed to have the upper hand. His star one-and-done forward, Jabari Parker, was eating UVa.’s lunch and making a run at dinner.

How does UVa. stack up as a potential #1 seed?

The short answer to the question, Can UVa. be a #1 seed in the upcoming NCAA Tournament, is yes.

Did NC State do enough to get NCAA invite? Coach K thinks so

NC State won 21 games, beat Syracuse once, maybe should have beaten the Orange twice, beat Tennessee, but yet the Wolfpack looks to be on the outside looking in as far as the NCAA Tournament is concerned. Duke coach Mike Krzyzewski thinks this is ridiculous, for what it’s worth.

NC State couldn’t seem to miss in the first half. Duke took care of that problem after halftime. The Blue Devils held State to 35 percent shooting in the second half to pull away to a 75-67 win in Saturday’s second ACC Tournament semifinal.

Tim Brando and Cory Alexander break down Rodney Hood’s performance and the exciting finish to Duke’s victory over Clemson. The Blue Devils escaped with the win on the final play of the game and will square off against NC State on Saturday.

Rodney Hood hit both ends of a one-and-one with 3.8 seconds left, and Clemson couldn’t get a shot off in the final seconds, allowing #3 seed Duke to escape with a 63-62 win over the Tigers in the finale of the 2014 ACC Tournament quarterfinals.

One, but not done: NC State has a lot of work to do to get NCAA bid

A team with an RPI at 64 can’t complain but so much about its NCAA fate. Its coach can complain about the perception that the league that it plays is in top-heavy.

It’s official: No #1 NCAA seeds for the ACC

Each of the Big Three in the ACC – UVa., Syracuse and Duke – lost to unranked teams last week. For teams that needed to avoid hiccups in the final week of the regular season and then win the ACC Tournament to have even an outside shot at a #1 seed in the NCAA Tournament, those losses proved catastrophic.

The top-ranked UVa. baseball team earned a 2-1 win over Duke Sunday afternoon at Jack Coombs Field in Durham, N.C. The Cavaliers (11-3, 2-1 ACC) took two of three games in the series and have won 13 of their last 15 ACC weekend series, dating to 2012.

The No. 1-ranked UVa. baseball team begins ACC play Friday with a three-game series at Duke. The weekend set begins with a 6 p.m. Friday game at Jack Coombs Field and will be followed by 1 p.m. matchups on Saturday and Sunday.

The Duke Blue Devils captured their 32nd home win Tuesday night with a 66-48 victory over Virginia Tech. Rodney Hood led the Blue Devils with 21 points while teammate Rasheed Sulaimon scored 15 points, hitting 4-9 from 3-point range. Duke improves to 12-4 in the ACC while the Hokies move to 2-13.

﻿North Carolina sophomore Marcus Paige has been voted the Atlantic Coast Conference Basketball Player of the Week, while Duke’s Jabari Parker earned ACC Rookie of the Week honors for the fifth consecutive week.

Duke’s Tricia Liston scored 21 points and led the Blue Devils to a 90-55 win over Virginia Thursday night. Five Blue Devils scored in double-figures and shot 56 percent as a team from the field. Duke improves to 4-0 in the ACC while Virginia moves to 1-3.

An 11-0 Virginia run erased an 11-point Duke lead, but the Blue Devils took the lead for good on a three-pointer from the left corner by Rasheed Sulaimon with 18.6 seconds left, and held on for a 69-65 win Monday night in Durham.

ACC Basketball Players of the Week

Boston College sophomore guard Olivier Hanlan and Duke freshman forward Jabari Parker have been named the Atlantic Coast Conference Basketball Co-Players of the Week, and Parker has also been named ACC Rookie of the Week for the second week in a row.

It can be hard to make sense of the ACC Coastal Division, with five teams within a game of first place heading into the final two weeks of the season. But as the fog lifts from a wild Saturday, it’s beginning to come clear that this one is really a two-team race involving Duke and Virginia Tech.

Syracuse sophomore guard Trevor Cooney has been named the first Atlantic Coast Conference Player of the Week of the 2013-14 season, while Duke freshman Jabari Parker was the unanimous choice as ACC Rookie of the Week.

Inside the Numbers: Clemson by 20?

Virginia has been more competitive the past couple of weeks, more than you might expect from a team reeling from a five-game losing streak. Even so, Clemson by … 20? That’s the early line on this weekend’s game in Charlottesville.

Duke converted just one third down. It was a fourth-down conversion that sealed the deal against Virginia Tech. The Blue Devils took a 13-0 third-quarter lead in Lane Stadium and then held off a late Hokie rally to post perhaps the biggest win in school history, 13-10, on Saturday.

Duke has now taken five of its last six games against UVa., which is maybe not even arguably the worst program in the ACC now.