Fifth seed UNC broke open a tight first half with a 14-5 run that closed out the first 20 minutes, and held off a couple of Boston College second-half charges to top the 12 seed, 81-63, on Wednesday in the second round of the ACC Tournament.

Bridgewater College professors to give presentation on swords

Drs. Gavin Lawson and Clifford Harmon will present “Swords in the Middle Ages and Renaissance” at7:30 p.m. Thursday, Jan. 15, in Cole Hall at Bridgewater College. 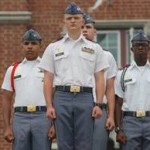 On Thursday, Cadet William C. Rowell of Chesapeake, Virginia was named as the Battalion Commander (BC) of Fishburne Military School for the 2014-2015 school year.

From lectures by featured speakers to music performances and theater productions, Bridgewater College offers a wide range of arts and events for the community to enjoy during the 2014 fall semester. 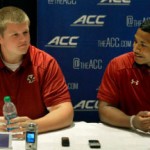 Listen to Play Ball! on WSVA

Play Ball! with Mike Bocock and Augusta Free Press editor Chris Graham is back on WSVA-550AM in Harrisonburg, Va., today at 6:25 p.m.

Christian Sheridan, an associate professor of English at Bridgewater College, is one of a select group of faculty members nationwide chosen by the Council of Independent Colleges (CIC) and the Center for Hellenic Studies to participate in an Ancient Greece in the Modern Classroom seminar on Homer’s Odyssey.

On March 19, National Certified Nurses Day, 33 Augusta Health nurses were recognized for their professionalism, leadership and commitment to excellent patient care for the national certifications they earned.

Over the past several months, 38 Augusta Health employees earned national certifications in their areas of expertise. Certifications require demonstration of extensive knowledge in a subject area, usually by examination.

Bridgewater College will celebrate the 134 years since its founding on Tuesday, April 1, presenting three awards during the 11 a.m. Founder’s Day Convocation in the Carter Center for Worship and Music.

The third-ranked UVa. baseball team finished off a three-game series sweep of Boston CollegeSaturday after taking both games of a doubleheader against the Eagles.

Behind 6 1/3 shutout innings from Nathan Kirby (So., Midlothian, Va.), the third-ranked UVa. baseball team rolled to an 8-1 victory over Boston College Friday at Davenport Field. Virginia (13-3, 3-1 ACC) came within an out of a shutout as five Cavalier pitchers limited BC (6-10, 0-4) to six hits.

A regulation-ending 13-1 run by #14 seed Boston College sent the game to overtime, but #11 seed Georgia Tech took control in the final minute of the extra session to pull out a 71-67 win in the final game of the first round of the 2014 ACC Tournament.

It had been a while since anybody has given UVa. a game on its home court at the John Paul Jones Arena in Charlottesville, Va.

UVa. improved to 9-1 in the ACC, its best start to a conference season since 1981-82. The Cavaliers won their 14th consecutive home ACC game, the second-longest streak in school history (16 straight home ACC wins from 1980-1982).

Chris Graham: Don’t worry about the ugly end to the UVa.-Boston College game

#20 UVa. jumped out to a 20-5 lead in the opening 10 minutes, then coasted, perhaps a bit too much, in defeating Boston College 77-67 Wednesday night in Charlottesville, Va.

A $2,500 grant to Bridgewater College from the Enterprise Holdings Foundation will fund the purchase of an electric-powered utility vehicle for use in the college’s recycling program.