First-year VMI head football coach Scott Wachenheim will make his debut on Thursday night, September 3, when the Keydets travel to Muncie, Indiana to face Ball State in the 2015 season opener.

Longwood is becoming quite comfortable in Willett Hall. Led by a career-high 22 points from junior forward Shaquille Johnson, the Lancers routed Penn State Beaver 106-74 in Willett Saturday afternoon to improve to 3-1 on their home court.

Four players scored in double figures and JMU shot better than 50 percent from the floor to pick up its largest men’s basketball road victory in four years with a 72-52 wire-to-wire triumph against Ball State Wednesday night at Worthen Arena.

Following their third win in a row, Liberty’s football program is back in both FCS national polls, which were released earlier today.

We knew the opponents, had a rough idea of the order that the games would be played, but now it’s official. UVa. football has its 2014 schedule, and we can now project that the ‘Hoos are headed toward their seventh losing season in the last nine years.

Mike London’s first task as the new head football coach at UVa. was to re-recruit the group that had committed to deposed predecessor Al Groh. It wasn’t the most stellar of classes, given the situation – ranked 11th in the ACC and 67th nationally by Rivals, but it was what he had to work on.

Chris Graham: How bad is Jon Tenuta’s defense? Worse than you thought

I’m not second-guessing the move to can Reid in favor of Jon Tenuta, who followed associate head coach Tom O’Brien to UVa. after O’Brien and his staff were let go by N.C. State last year. Reid’s defense ranked fourth in the ACC last year, which is to say, it wasn’t the Virginia defense that was to blame for last year’s 4-8 debacle.

Old Dominion University football junior quarterback Taylor Heinicke became the first Division I quarterback in the state of Virginia to pass for more than 10,000 career yards.

UVa. coach Mike London is once again is under fire for mismanaging an endgame situation. This time it was UVa.’s final drive at Byrd Stadium on Saturday.

UVa. football coach Mike London talks with the media in advance of his team’s game on Saturday at Maryland.

UVa. football coach Mike London talks with the media after his team’s 48-27 loss at home to Ball State.

Ball State lays the smack down on Virginia, 48-27

Three third-quarter Virginia turnovers turned into 17 Ball State points, and allowed the Cardinals to pull off a 48-27 upset in Charlottesville on Saturday. 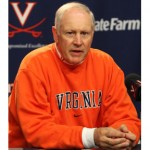 I never thought I’d pine for the days of Al Groh, who returned UVa. football to the mediocrity that George Welsh had inherited. But mediocrity would be a step up from what Mike London has done to the program.