A collaboration between the U.S. Army and the Biocomplexity Institute of Virginia Tech signals a new era for data science in the military.

Dr. Rob Marsh, an independent practitioner in Middlebrook and Raphine, Va., is the 2014 Country Doctor of the Year. Augusta Free Press editor Chris Graham interviews Dr. Marsh for our “Inside the Newsroom” podcast.

Chang-Tien Lu, an associate professor of computer science in the College of Engineering at Virginia Tech, has been awarded a $300,000 subcontract from the United States Army Research Office and United States Army Engineer Research and Development Center to develop an automated tool to make sense of data captured in news articles, tweets, images, and audio and video streams.

U.S. Senators Mark Warner and Tim Kaine announced that the National Defense Authorization Act of 2015 has cleared a key Senate hurdle and will now advance to a vote on final passage. 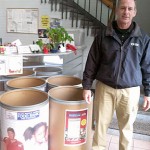 The VMI Keydets rallied from a 12-point second half deficit to take a six-point lead with four minutes to go, but the Army Black Knights finished the game on a 15-3 run and went on to win the All-Military Classic, 92-86.

Trey Chapman hit the game-winning three-pointer, propelling the VMI Keydets past The Citadel Bulldogs, 66-65, in the opener of the 2014-15 All-Military Classic Friday.

Footage from the Veterans Day ceremony at Fishburne Military School in Waynesboro, Va., on Nov. 11, 2014. The guest speaker was Barrett Overton, a Fisbburne alum now serving in the U.S. Army.

The American Farm Bureau Federation is encouraging its members to participate in the public commend period for the proposed EPA “Waters of the U.S.” rule.

While Governor Terry McAuliffe said Monday he will not impose mandatory quarantine on travelers from Ebola prevalent countries, the U.S. Defense Department is doing precisely that.

Times have been announced for the 2014-15 All-Military Classic basketball tournament, which will feature VMI, The Citadel, Army and Air Force, and will be contested Nov. 14 and 15 at West Point, N.Y.