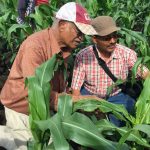 An invader destroying maize in Africa is hitting countries where drought and political instability have already caused hunger.

Africa is one of the biggest continents in the world and there are various countries in this beautiful continent.

Two Virginia Tech undergraduates will conduct research on the ecology and evolution of infectious disease in northern Botswana.

James J. Hentz will lecture at Washington and Lee University as part of the Mellon Seminar on Human Rights in Africa.

After spending the summer watching nervously from afar as Ebola swept through her native Liberia, sophomore Winifred Gray-Johnson wanted to take action when she returned to EMU.

Her speech and all other events in the multi-day program, “Celebrating the Life and Legacy of Dr. Martin Luther King Jr.,” are open to the public at no charge.

The deadly politicization of Ebola

The Ebola story gets stranger every day as administration officials, the CDC, and Mr. Obama himself stretch logic and reason to the breaking point and beyond.

U.S. Senators Mark Warner and Tim Kaine are requesting information on what is being done to ensure Virginia hospitals and health professionals have the supplies, training and information they need to effectively identify and treat any patients who present symptoms of Ebola.

Based on the media reports on Ebola as it relates to the two people who have contracted the deadly virus inside the United States, you’d think that the government is bungling us into a pandemic, or worse.

Congressman J. Randy Forbes (VA-04) issued the following statement in response to the death of the Ebola patient at Texas Health Presbyterian Hospital in Dallas, and the subsequent infection of two healthcare workers within the United States.

Abby Pennington, a biology and education major at Eastern Mennonite University in Harrisonburg, was exposed to a highly privileged educational experience and a highly deprived one – all in the summer before her senior year.

Remarks of President Obama on military action with ISIL

My fellow Americans – tonight, I want to speak to you about what the United States will do with our friends and allies to degrade and ultimately destroy the terrorist group known as ISIL.

Tropical depression may develop in Atlantic this week

AccuWeather reports a robust tropical feature has emerged in the eastern Atlantic and could develop as the week progresses.

AccuWeather reports a new tropical wave has emerged off the African coast and could develop into an organized system by the end of the week and into the weekend.

Researchers at the University of Virginia School of Medicine have developed an important new diagnostic approach to determining the cause of diarrhea in the developing world, revealing a problem even more complex than previously appreciated.

A $4.4 million grant from the Bill & Melinda Gates Foundation is giving Virginia Commonwealth University School of Engineering and collaborating research universities an opportunity to supply developing countries with affordable access to AIDS drugs.

A Shenandoah Valley-based zero-emission portable generator manufacturer recently donated a brand new flag to NeuroRestorative Virginia at Breezy Hill “just in time for Flag Day,” according to Scott French, one of SUNRNR’s principals.

A painful, mosquito-borne viral illness has surfaced across the United States, carried by recent travelers to the Caribbean where the virus is raging.

Gaye Adegbalola embraces and redefines the classic style of the great blues divas of the 1920s and 30s – those often fiercely independent “wild women” who were unashamed to lay their souls bare and unafraid to give advice. Adegbalola invokes the spirit and addresses the lyrics & improvisational techniques of these classic blues women and brings history to life.