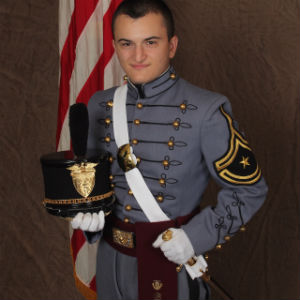 Cadet Major Luciano M. Dolfi, son of Mr. and Mrs. Mike Dolfi of Stuarts Draft, Va., has been named as Battalion Commander for the 2016-2017 Fishburne Military School Corps of Cadets.

Dolfi, a four-year cadet, is a member of the National Honor Society, serves as the Lieutenant Governor of Division 9B for the Capital District of Key Club International, and is an active member of the Youth Philanthropy Committee of the Blue Ridge, During his cadetship Dolfi has been a key member of the two-time state champion rifle team, and has played varsity Lacrosse for three seasons. As a member of the Fishburne Color Guard, Dolfi helped to present the Colors for Washington Wizards, Baltimore Orioles and Washington Nationals home games. In 2015, Dolfi was honored with the Reserve Officers Association Citizenship Award.

This summer Dolfi was selected to participate in American Legion’s Virginia Boys State. As a lawyer for the Boys State Moot Court, Dolfi, successfully argued seven cases before appearing at and winning in the Boys State Supreme Court. During the four days of deliberations and presentations, he gave first arguments and rebuttals for his team eventually earning first place from among the over one hundred and twenty competing teams.

Dolfi says the experience at Boys State was particularly beneficial to him as he plans to pursue a career as a defense attorney.

Looking ahead to his duties as Battalion Commander, Dolfi states “The challenge now is lead others to be their very best. I’ve worked very hard for the last four years to reach this place and now I’ve got big shoes to fill. My goals are no longer only personal goals, now my goals include my brothers in the Corps of Cadets. I want our Corps to be the best we can possibly make it.”

A dual citizen of the United States and Italy, Dolfi notes “the Italian culture is very dedicated to tradition and personal integrity…these are traits my family has reinforced all my life and they fit well with the culture and goals here at Fishburne.”

“Being a local student, this is far more meaningful because I am working to represent not just my school but my community as well,” he concludes.

Cadet Major Dolfi will officially take command of the Fishburne Military School Corps of Cadets in a First Formation Ceremony to be held in the FMS Quadrangle at 3pm on Wednesday, August 31, 2016.

Fishburne Military School is the oldest and smallest of all military schools for boys in Virginia. Its college-prep curriculum is built upon the structure of an Army JROTC program. FMS is designated as a JROTC Honor Unit with Distinction and may nominate qualified candidates to the United States Service Academies. Fishburne hosts one of only four Summer JROTC programs in the nation, accredited by US Army Cadet Command.