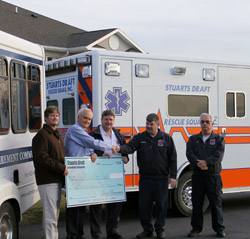 For every apartment or villa rented in October, Stuarts Draft Retirement Community pledged to donate $1,000 to the local rescue squad. The promotion paid off well for the Stuarts Draft Rescue Squad, a volunteer nonprofit organization.

“We are thankful for what the Stuarts Draft Rescue Squad does for Augusta County on a daily basis,” said Leland Brenneman, owner and operator of Stuarts Draft Retirement Community. “The rescue squad has helped us tremendously over the past 15 years, and we are grateful for their commitment to service and excellence.”