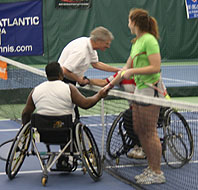 Mel Curry tries to “hit the fur off that ball.” Robbie Thomas is more an angles and drop shot guy.

“My shoulders are wearing out, but I’m not going to give up any of this,” said Thomas, after a recent exhibition match against Curry, a former United States Tennis Association champion, on the tennis courts at Augusta Health in Fishersville.

A PE teacher and tennis coach in Stafford County, Thomas has been “pushing this chair for 29 years,” referring to the wheelchair that has been his way of getting around since the drunk-driving accident in high school that put his life on a different course.

Curry, for her part, walks using a prosthetic limb, but her chair has helped keep tennis in her life after having to undergo surgery to amputate her left leg from just above the knee in 2003.

“I really do believe that this is the path my life was supposed to take,” said Curry, who took up wheelchair tennis in 2005 after reading a newspaper article about the sport back home in Fredericksburg. A year later, she was winning tournaments with her ferocious serves and groundstrokes.

“The competitive aspect is one part of the blessing. The bigger thing to me is to be able to work with the USTA and to teach clinics and lessons to other persons with disabilities, to teach them the game I love so much, to get them enthused and excited about playing the game. That’s the biggest blessing to me,” said Curry, who plans to make regular treks to the Valley to help get the new wheelchair tennis program at Augusta Health moving forward.

“This program fits the Augusta Health model of community, wellness, everything we do here,” said Chad Reed, the tennis coordinator at Augusta Health and a tennis pro. “It’s a tougher sell if it’s just a tennis center, and it’s just for-profit. If it’s just about making dollars, it can be a hard fit. But here, it fits our model well. It’s right in our wheelhouse of what we do.”

Reed has been coaching wheelchair tennis for several years, picking up the sport as a coach when a local resident who wanted to train to play competitive wheelchair tennis asked him if he could come up with a training program.

“I sort of figured it out from there,” said Reed, who has since earned a training certification in wheelchair tennis, and is now coaching a group of beginner and competitive players who are training at Augusta Health.

Wheelchair tennis looks and plays a lot like tennis for able-bodies, the key difference being that players can play shots out of the air, off one bounce or off two bounces. From a training perspective, Reed said the stress is on mobility.

“Wheelchair players don’t have lateral movement. If I was teaching you, I’d tell you to move laterally. We have to teach them to move in what is called a hub pattern, which is where their strength and conditioning comes into play, because they need to be really strong to move in that hub pattern,” Reed said.

It turns out that training to play tennis has a health benefit for people in wheelchairs. The strength and endurance needed to play the game also translate well into daily living situations.

There’s also the emotional benefit to play that crosses the boundaries of able-bodied and disabled. “This is the only sport where we get to compete on an even playing field with able-bodies,” said Thomas, who played in a mixed-doubles match against Curry with two able-bodies after the singles match to demonstrate how tennis can bridge the sports divide between able-bodies and the disabled.

Curry ups the ante in a weekly doubles match in Fredericksburg in which she is the only participant in a chair. “It helps them to integrate me into the game. So that they know about the two-bounce rule, and so they can know that they don’t have to cover the court, because I’m there,” Curry said.