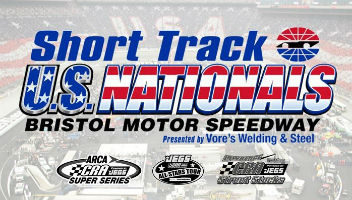 Stephen Nasse showed the crowd at The Last Great Colosseum that he is a rising star in the short track oval ranks.

The young Florida driver who set a BMS track record for quickest lap with a qualifying best of 14.526 seconds, says this is one of the biggest victories of his young career.

“It’s right up there for sure,” the Pinellas Park, FL native said. “I won last week at a track that’s five minutes from my house so that was a big one for my family, but winning here, it’s Bristol, baby, and that’s all you need to know.”

In the 100-lap Super Late Model race Nasse recovered from a loose wheel early in the race and reeled in Casey Roderick in dramatic fashion during the closing laps to take the victory. Nasse felt the loose wheel and decided to pit to correct the problem, but in doing so he gave up track position. However, he charged from the back of the pack in an impressive 60-lap jaunt to retake the lead with four laps to go.

“I felt a vibration and (fellow driver) Steve (Wallace) came up beside my car and let me know that it was wobbling,” Nasse said. “Without his help we probably wouldn’t be here right now and would’ve had a wrecked race car.”

“We came from the back to the front and put on a great show for the fans,” said Nasse, who celebrated the victory with his parents and young nephew. “It was a great night for our family for sure.”

In Street Stock, Barnes took the lead with 20 laps to go and never looked back, taking his third straight victory in this event. He started eighth in his No. 44 machine and worked his way up through the field. His car got better as the laps wore on and a late caution bunched the cars up for one final restart with five laps to go. Barnes got a great jump on the final restart and held off his father, Chuck Barnes Sr. at the finish line.

“In the past Brett Hudson led all the laps and we came in at the end and took the win, but this year we tried to set our car up to run better the entire race and we were able to do that,” Barnes said. “It’s awesome to win here again, and to finish one-two with my dad makes it real special.”

In Compacts, Gossar led all but three laps to finally grab a Gladiator trophy and sword at BMS. After contending for the victory the last two seasons, Gossar came up short both times. Tonight, however, he wouldn’t be denied.

“We finished second last year and ran well the first year here and should’ve won that one too,” Gossar said. “This is Bristol and it’s on every short track racer’s list of places they want to win. Our car was running great this weekend and we felt like we had a good shot at winning. We’ve been close here a couple of times, so it feels good to finally get it done.”