In the brightly lit auditorium of Stuart Hall School in Staunton, sophomore Sophia Schwaner stood listening intently while visiting artist and music director Ben Rauhala, seated at the piano, worked through her song, “At Sea.”

Rauhala and composer/lyricist Max Vernon made up the coaching team that had come to Staunton from New York City to hone and orchestrate Schwaner’s song into a Broadway-ready composition. The opportunity for a talented young artist to be mentored on an original composition by professional artists is at the center of the National Endowment for the Arts Musical Theater Songwriting Challenge, a partnership with the American Theatre Wing. 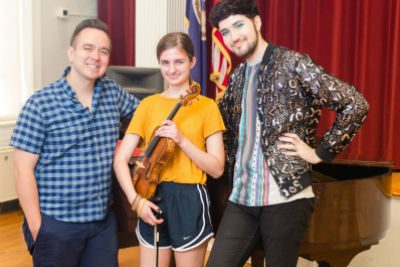 Schwaner is one of only six winners of this national songwriting contest for high school students, selected from among 160 applications submitted by aspiring songwriters in 40 states. In October, Schwaner’s song will be recorded into a cast album with the songs of the other five regional winners.

Schwaner’s song takes place in the ancient world at the time of the Persian Wars. The Greek queen Artemisia has allied herself with the Persian Emperor Xerxes and is leading his forces and ships into battle against her own people. She says that in the song, Artemisia is, “debating the nature of life vs. death, loyalty and alliance and the role that she and the rest of the soldiers at Salamis played in shaping and changing the world.”

Speaking of Schwaner’s song, Vernon said, “What I love about it is that it’s so musically beautiful. It’s gorgeous, it’s eerie, it’s spooky, but it’s introspective.” He added, “Something that we’ve been doing this week in our orchestration and development of the song is finding a moment where there is a climax, and we feel we are at battle all of a sudden. Then it goes back to that place of introspection. So now it feels like the song has really taken us on a journey.”

Rauhala added, “It’s a song about a powerful, strong, independent woman . . . and there’s so much drama in the chords, and it’s not afraid to be dramatic in a theatrical sense. I love that it’s sweeping and epic.”

Of the many things Schwaner learned in her two-day coaching session is, “After talking to Max and Ben, they’ve advised me that there is no one way to write a musical. . . It’s what you want to do and what you make of your experiences. So it’s going to be an interesting road ahead, but you have to make it your own path.”

For more information about the National Endowment for the Arts Musical Theater Songwriting Challenge and the other regional winners go to the Arts Endowment’s newsroom.