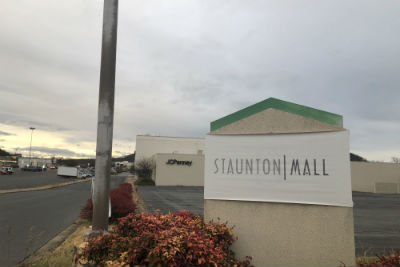 Notices from Staunton Mall management that the mall, built in 1969, had been sold and that the new owners required all tenants vacate within 30 days.

According to LoopNet.com, the Staunton Mall will be demolished to make way for a new shopping center and multi-family housing.

Bill Burrus and Matt Shiflett own Know Knew Books, which opened near the JC Penney a year and a half ago.

“It’s going to be a challenge to find a place to move to,” said Shiflett.

He added that all of the mall’s tenants will face the same challenge, especially Good Times Café, which opened earlier this year before the pandemic began, and Hot Wok, the Chinese food restaurant which relocated from near Legacy Theaters to a renovated space in the front of the mall.

Military Surplus, Bath and Body Works, Madd Antiques, the Cinderella Project, Jackson Hewitt, Belk, Maurice’s and Family Barber & Beauty are among the other tenants who must vacate the premises before Dec. 24.

Burruss, a graduate of Virginia Commonwealth University, owned a bookstore for 25 years in California.

Know Knew Books has operated with the help of volunteers, who were paid for their time with store credit.

“The community has really come in and recognized us,” Burruss said.

The store has books by local authors and art by local artists also for sale.

Before the news that the store would have to vacate the mall, Burruss said he had an idea to invite the local SPCA and other animal organizations to bring cats who are available for adoption into the store. He did so at his bookstore in California.

“It’s been enough [business] so that Bill and I could be full time here,” Shiflett said of the store’s success in the mall. “We bought ourselves a job.”

Then the book store owners got volunteers to help organize the book sections and make the store accessible for book lovers.

“It is what it is, but timing isn’t ever going to be great,” Shiflett said.

According to Burruss, the used book store just bought a half a million books in inventory, and has been using the empty JC Penney next door for storage.

Finding a new location for their store and packing up inventory will take time.

Time that Know Knew Books and the other tenants in the Staunton Mall do not have.

Church United began occupying space in the front of the mall in September 2018. Sunday services began in January 2019.

Despite making changes in its 25,000-square-foot space and growing as a group of worshippers, Pastor Rob Spencer said the church always knew that the Staunton Mall was a temporary home because the mall could be sold at any time.

“For us, we’re in a different position than all the other tenants,” said Spencer.

After Dec. 24, Church United can hold online worship services while it searches for a new church home.

“Our heart goes out to all those small business owners and those who are losing their jobs,” Spencer said.

While packing up the church’s furniture and memories, and finding a new home “certainly is an inconvenience,” Spencer said Church United has always grown by being “scattered.”

Before occupying space at the mall, the church held worship services for five years at Visulite Cinemas in downtown Staunton.

“We love Staunton, and we want to stay in Staunton,” Spencer said. Church United’s “heart is to minister to the Staunton community.”

Spencer said that the 30-day notice is not a reflection of the mall’s previous owner and management.

“It’s unfortunate that the new owners aren’t sympathetic to the business owners [in the mall],” Spencer said.

Spencer said that Church United has faith in God’s plan for its next move. 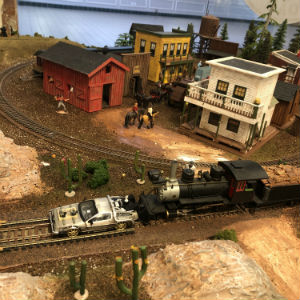 “God wasn’t given a 30-day notice on this. He’s known for a long time,” Spencer said.

The church hopes that its next move is more permanent.

“I know God has something greater in store for us,” Spencer said.

The Augusta County Railroad Museum was founded 26 years ago, and has occupied space in the Staunton Mall near Belk for seven years.

“All we got right now is a storage building,” said Jerry Hendricks, past president of the museum, of the museum’s plans after vacating the mall.

Hendricks said the that museum, a nonprofit of 54 members who volunteer their time at the museum, is talking to realtors about possibilities. Seven years at the mall was the longest the museum stayed in one location.

Volunteers are needed to help pack up and move the museum’s 22 railroad tracks, trains, and set decorations. If interested, go to acmrrc.org for contact information.