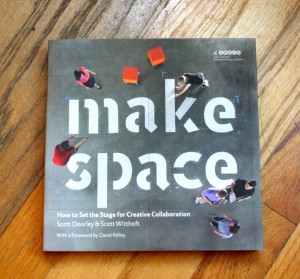 Article and Photo by Allison Profeta/StauntonInsider.com

Makerspace.  It is a community workspace designed to allow those who tinker, program, invent, build, code, problem solve, and so much more, have the space and equipment needed to dream big and then turn those dreams into reality.  And we now have one right here in Staunton.

One day, in the not too distant past, a Staunton resident by the name of Dan Funk, a software developer, visited a man in Charlottesville by the name of Brian Willford.  Brian was working on creating a makerspace in Charlottesville, and he eventually opened Tinkersmiths.  That was all the inspiration Dan needed to create the same type of amazing, inspiring space right here in Staunton.  So he did.  He partnered up with Jim Rutt, a retired entrepreneur, and the two of them found a beautiful, well-lit space ready to welcome Staunton’s tinkers!  His vision for the space is that of a co-working space/tinker space/artists’ studio where woodworkers can build, sculptors can sculpt, inventors can invent, programmers can code, quilters can quilt, and so much more.

Dan gets excited when he talks of what is already happening here at the Staunton Makerspace.  They are offering weekly classes on 3D printing (that’s right – they have a 3D printer!), teaching things like how to get your 3D shape to the printer and avoiding some of the pitfalls that Dan has already experienced as he’s worked with the printer.  One of the objects he is in the process of designing is a small replica of Staunton’s famous watering can with the initials “SMS” – for Staunton Makerspace – on the side.  Designing and creating your own 3D object, as opposed to printing one from an open-source app, involves a bit more trial and error, as evidenced by a few of the prototypes Dan has printed that fell a bit short of his vision.  However, one can see from the progression that a finished prototype is not far off.

One evening of tinkering produced a homemade security camera for the space.  Dan purchased a fake camera off of Amazon – just a mock camera that people hang to try to ward off crime.  Using a raspberry pi, a camera module, and an open source program found online, he built a real security camera with motion detection, all for less than $50.

Dan spoke to me about the importance of women in the maker movement.  It is important to him that the space be as inviting to girls and women as it is to boys and men and it’s clear when speaking to him that he values a space that welcomes ALL makers, from the embroiderer wanting to try out an industrial sewing machine to the fashion designer wanting to embed electronics into clothes to the jewelry maker wanting to utilize a CNC machine to create intricate designs on metal beadwork.  No matter the end result, the Makerspace is here to allow it to happen!

You see, the most incredible thing about the Staunton Makerspace . . . is the potential.  It’s everything that hasn’t yet happened.  It is the teenager who will discover a passion for a lost art that is no longer taught in schools, like building solid wood furniture.  It is the single mom whose etsy shop turns into a brick and mortar store.  It is the coder who puts out the next app that changes lives.  Or the software developer who ends up with his or her company name on the stock exchange.  It is all of those things and so much more that we can’t begin to imagine because right now, or perhaps not even yet, it is just a twinkle in someone’s eye.  Someone in Staunton is working a dead end job, or folding his laundry, or nursing her daughter, or researching online, and all the while this person may hear a quiet voice whispering in time to his or her heartbeat . . . . a voice that asks, “What if?”

Just how inspired was I?  Halfway through watching a “fidget cube” print on the Staunton Makerspace 3D printer, I decided I was going to take all of the photos I had been taking and turn them into a time lapse video.  I’ve never, ever created a time lapse video.  Or taken time lapse photos.  And of course after creating it I read up some more on the topic and know now everything I did wrong.  But that’s not important.  What IS important is, I did it!  I made my very first video.  I taught myself how to do it and then how to add music to it.  I even started a Staunton Insider youtube channelto showcase it.

So yeah.  The Staunton Makerspace is pretty damn inspiring.

Find them on Facebook and definitely check out their MeetUp pagewhere you can find out about upcoming events and classes!  Every other Thursday, including this upcoming September 18th, 2014, they welcomeGeeks Who Craft!