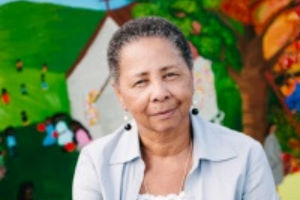 Wilson was Staunton’s first African American councilwoman, serving from 1991 to 2008, a portion of that time as vice mayor.

“On behalf of City Council and the entire City of Staunton, it is my great honor and pleasure to recognize the significant and inspiring contributions of Rita S. Wilson as we dedicate our Council Chambers in her name. Her legacy of service, advocacy and leadership on behalf of our city is a shining example of the highest level of public service,” said Mayor Andrea Oakes, who will lead Thursday’s dedication ceremony.

The dedication will include an unveiling and reading of an honorary plaque, viewing of a video about Wilson, and comments from current and former Council members.

The renaming honors Wilson’s many years of service to the city and her legacy of advocating for equality in all walks of African American life including recreation and education.

Wilson said on many occasions that she became a council member to represent people that she felt were underrepresented.

“The fact that she went back to college as an adult when her children had grown, and then became a social worker, and then even worked with people, helping them get the necessities they needed after she even retired,” former Vice Mayor Ophie Kier said. “That’s what a leader is, and I felt it was time we acknowledge that.”

A short video about Ms. Wilson, her service and legacy can be viewed on the City’s YouTube channel following the dedication ceremony.

In 2016, following Ms. Wilson’s death, the Community Foundation of the Central Blue Ridge created the Rita S. Wilson Memorial Scholarship to support residents of Staunton and Augusta County seeking to continue their education.

In addition to supporting high school seniors as they transition to college, the scholarship is available to adults in the workforce who, like Ms. Wilson, choose to pursue higher levels of education and new skills.