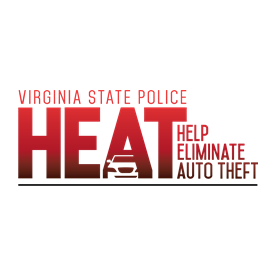 Just in time for this week’s Arctic winter blast, the Virginia State Police Help Eliminate Auto Theft (HEAT) Program is launching of a new statewide campaign aimed at reducing the chances of Virginians having their vehicles stolen from in front of their residences or in parking lots.

Through a new video public service announcement (PSA) and a new social media platform, the HEAT Program is working to raise the Commonwealth’s awareness about the problem of “puffers.” A puffer is a vehicle left running, unattended and unlocked, to warm up in the winter months.

“Combating motor vehicle theft does not stop with our law enforcement officials, but requires a community approach,” said Secretary of Public Safety and Homeland Security Brian Moran. “We are hopeful that this public education campaign will increase personal responsibility in motor vehicle theft prevention in communities across the Commonwealth.”

“Despite Virginia’s progress with reducing vehicle thefts overall, this particular crime remains an issue needing our attention,” said Colonel Gary Settle, Virginia State Police Superintendent. “Our special agents and local law enforcement assigned to the HEAT Program do an excellent job investigating motor vehicle thefts and related crimes. However, it’s the ‘easy access’ thefts that citizens innocently and unknowingly contribute to that won’t stop without a collaborative effort among the motoring public and law enforcement.”

The new crime prevention campaign features a 30-second PSA that is running now through February 28.  The PSA “Morning Routine,” features a man becoming a victim of auto theft when he commits the most common mistake this time of year – leaving his idling car unattended while he gets ready for work. To further expand its reach with the public, the vehicle puffer PSA is being unveiled on HEAT’s new Twitter platform at @VSPHEAT. The Twitter social media platform will operate along with the program’s existing Facebook (@HEATreward) page. During the month-long campaign, the social media platforms will host special giveaways, encourage followers to use the #ProtectYourRide hashtag, and key vehicle theft prevention tips.

“Each year we are seeing a substantial number of vehicles stolen because the keys are left inside and the motor is left running,” explained HEAT Program Coordinator First Sergeant Thomas Molnar. “We our focusing our efforts on this particular behavior with the goal of educating the public about the risks, dangers and heightened crime associated with motor vehicle theft, specifically “puffers” during this time of year. Vehicle thefts are an issue year-round, but our two busiest times are during the summer and again in the winter months.”

The Virginia State Police Help Eliminate Auto Theft (HEAT) program was established in 1992 to educate citizens and law enforcement about the theft of vehicles and vehicle parts. For more information, visit HEATreward.com or follow us on Facebook @HEATreward and Twitter @VSPHEAT.