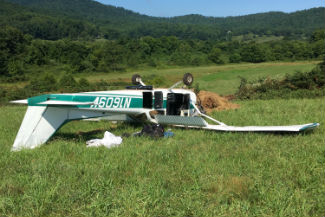 At 9:36 a.m. Thursday (Aug. 8), Virginia State Police Trooper Z.C. Harris was alerted to a small, private plane in distress and needing to make an emergency landing.

The 1976 Cessna Skyhawk made a crash landing in a field in the 5200 block of Plank Road. The aircraft overturned and came to rest upside down.

The pilot, Robert J. Fecteau, 61, of Taylorsville, N.C., suffered minor injuries and was treated at the scene. He was the plane’s only occupant.

The plane was en route to Warrenton, Va., from Hickory, N.C.

The NTSB was notified and the FAA responded to the scene. Engine failure is being investigated as a factor in the cause of the crash.