State Police remind drivers to buckle up, be safe this Memorial Day weekend 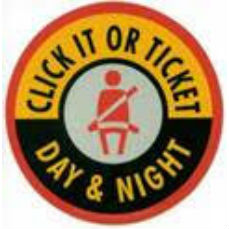 With the start of the 2016 Click It or Ticket spring mobilization campaign, the Virginia State Police is taking this opportunity to remind motorists of the need to always buckle up when driving and/or riding in a vehicle.

The two-week, concentrated educational and enforcement initiative began Monday, May 23, 2016, and runs through Sunday, June 5, 2016. The annual Click It or Ticket campaign combines high visibility enforcement of seat belt and child safety seat laws with outreach and education.

According to the National Highway Traffic Safety Administration (NHTSA), those who use a seat belt are 45 percent less likely to be fatally injured in a crash. In addition, if all passenger vehicle occupants age 5 and older involved in fatal crashes had worn their seat belts, an additional 2,814 lives could have been saved in 2014 alone nationwide.

“The state police cannot stress enough the importance of always using a seat belt when on the road,” said Colonel W. Steven Flaherty, Virginia State Police Superintendent. “Buckling up takes just seconds of you and your passengers’ time and yet can make the difference of a lifetime if and when one is involved in a crash. As we head into the Memorial Day weekend and summer travel season, all motorists are reminded to #DrivetoSaveLives whether it’s to school, work, the store, the beach or the mountains. Drive like your life depends on it.”

Since the 2016 Memorial Day holiday weekend falls within this year’s CIOT campaign, state police troopers will be even more vigilant in their efforts to increase seat belt usage among adults, teenagers and children. Occupant restraint enforcement is a key component of the Operation C.A.R.E. (Combined Accident Reduction Effort) traffic safety initiative that begins 12:01 a.m. Friday, May 27, 2016, and concludesMonday, May 30, 2016, at midnight. The state-sponsored, national program encourages law enforcement agencies to increase visibility and traffic enforcement efforts on major travel holidays, like Memorial Day. The program also means that all available Virginia State Police troopers will be on patrol through the holiday weekend.

The 2015 Memorial Day Operation C.A.R.E. initiative resulted in troopers citing 1,314 individuals who failed to obey the law and buckle up, as well as issuing 403 citations for child safety seat violations on Virginia’s highways statewide. In addition, state police cited 13,728 speeders and 3,452 reckless drivers. A total of 142 drunken drivers were taken off Virginia’s roadways and arrested by state troopers.

There were 14 traffic fatalities statewide during last year’s four-day statistical counting period for Memorial Day weekend. In 2014, there were eight traffic deaths and, in 2013, Virginia experienced nine fatalities on Virginia’s highways during the holiday weekend.*

With additional troopers and other law enforcement working on Virginia’s highways this holiday weekend, Virginia State Police also reminds drivers to comply with Virginia’s “Move Over” law. A life-saving law intended to protect public safety responders and others who have a responsibility to work the roads. Drivers are required to change to another travel lane or, when unable to, to cautiously pass emergency personnel stopped on the side of the road. The law also includes highway maintenance vehicles and tow trucks equipped with flashing amber lights.