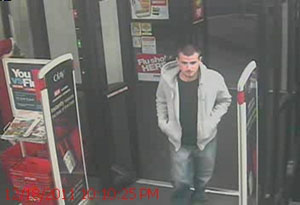 The Virginia State Police is asking for the public’s help with identifying a man wanted for committing prescription fraud in the Charlottesville region. State police are also looking into similar crimes possibly associated with this individual occurring in the Roanoke and Tidewater areas.

During the past two weeks, the unidentified white male has attempted to or obtained at least six illegal prescriptions at pharmacy chain stores in the Charlottesville region. The fraudulent prescriptions are written for painkillers, most commonly for Oxycodone. Investigators have reason to believe this man may be working with a group of individuals to illegally obtain the prescription narcotics.

Virginia law 18.2-258.1 prohibiting the use of fraudulent prescriptions to obtain narcotics is a Class 6 felony that can carry a penalty of up to five years in jail.

Anyone with information about this individual is encouraged to contact the Virginia State Police at (434)352-3469 or email john.phillips@vsp.virginia.gov.