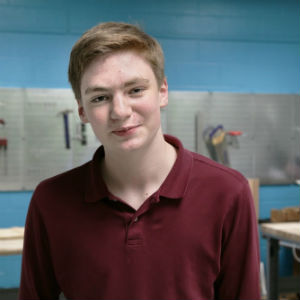 Anders project, Revealing Unseen Motion: Eulerian Magnification Applied to Live Video, involved processing a webcam video so that small motions were magnified. The specific example he used was video of a baby’s heartbeat; without magnification the heartbeat would otherwise have been practically invisible.

“The most obvious applications of my program were in the medical field, with non-invasive monitoring of vitals, and in engineering, with determination of structural stability such as using it to examine swaying in a bridge in the wind,” said Knospe.

The project was an outgrowth of Knospe’s work in an independent study in the field of computer vision with Mr. Cohen, assisted by Mr. Minster.

“Had it not been for Mr. Minster’s amazing teaching, I would never have been as engrossed in computer science as I am, and I would not have the technical competence in programming to complete my science fair project,” said Knospe.

“Mr. Cohen is a phenomenal teacher and without the mathematical background he has given me, as well as his unwavering support and confidence in my ability, my science fair project would have been impossible.”

Knospe will take part in the Intel International Science and Engineering Fair in Pittsburgh in May. The event routinely draws together approximately 1,700 of the estimated 7 million high school students who take part in science fairs each year. After a week spent celebrating science, technology, engineering, and math, all participants will showcase their work and compete for more than $4 million in awards and scholarships.