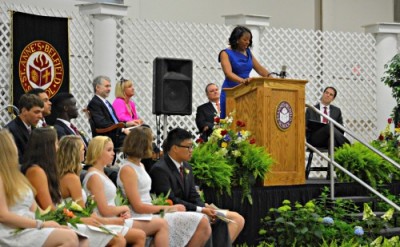 St. Anne’s-Belfield School marked its 105th Commencement exercises today with by a celebration of the Class of 2015 and a keynote address by Megan Hughes Perry ’04.

“To thrive you must be in constant pursuit of excellence,” Ms. Perry told the 89 graduating seniors. “I urge you to reach beyond your comfort zone and choose to thrive. Be dedicated to the pursuit and process required to perfect your craft because better is always possible.”

Ms. Perry, a 2004 graduate of the School and member of the School’s Alumni Association Board, currently works for the WNBA with a primary focus on scouting top college prospects in preparation for the WNBA draft and managing player appearances for all league events. She can also be found in front of the camera as a basketball color analyst, covering games on CBS Sports Network, A-10 Network, and NEC Front Row.

“This is a close-knit class, they appreciate one another and what each has brought to their class and to our School,” said David Lourie, head of school, of the graduates. “They have injected great spirit and good humor into our community.”

The Commencement ceremony also recognized four inductees to the School’s Quarter Century Club, families who have had children at the School for 25 student years or more, as well as 18 “sandbox kids” who have been at the School since Pre-School, Kindergarten, or first grade.

In addition, five awards were presented. The Malone Prize, recognizing a member of the School’s community for loyalty, service, and contributions to School life, was awarded to April Waylett. In a special recognition at the ceremony, longtime faculty member and administrator Michael Waylett was honored with the official renaming of the St. Anne’s-Belfield School Service Award to the Michael E. Waylett Service Award. The recipient of the award was Ms. Shari Norte, the School’s head athletic trainer.

Also honored was Mr. Jack Rossi, who is retiring after 26 years of service to the School.