Spears honored as Chamber of Commerce Citizen of the Year 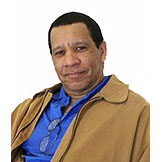 He was in for a surprise.

“I’m going to get somebody. I can tell you that,” said Spears, the youth-sports director at the Y, who was honored as the Chamber’s Citizen of the Year.

Spears has been a part of the Waynesboro Y family for 35 years. It started with him volunteering as a referee for youth basketball, then coaching rec-league and AAU ball. Spears now oversees all youth-sports programming year-round, and in the process has come in contact with literally thousands of Waynesboro and Augusta County residents as they’ve come up through youth sports and had children of their own to send Spears’ way.

A group of current Y young athletes were part of the surprise at last night’s Chamber of Commerce dinner. As Spears’ name was announced as the 2011 Citizen of the Year, the group came bounding into the banquet room wearing their team T-shirts to gather round Coach Spears.

“I’ve been blessed over the years. This is my family right here,” Spears said, gesturing toward the group. “We’ve grown together. We’ve had a lot of opportunities. I just want to thank you guys for putting up with me.”