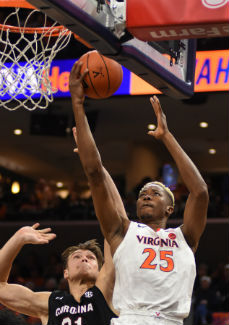 Mamadi Diakite drives from the corner to finish in close. Diakite tallied a career-high 21 points. Photo by Dan Grogan/GroganVision

Virginia fought back from a 13-point second-half deficit to tie the game, but South Carolina was the better team Sunday.

The Gamecocks took it to the Cavaliers early, then responded after a 16-3 UVA tied the game to take control on their way to a 70-59 win at JPJ on Sunday.

Virginia got it back down to seven inside of two minutes to go, but that was as close as things would get.

Mamadi Diakite had a career-high 21 points for Virginia, but he was the only Cavalier to have any kind of effectiveness on the offensive end.

Kihei Clark had nine points and seven assists, but also had seven turnovers.