Snake species you will find on your Virginia property, and how to get rid of them 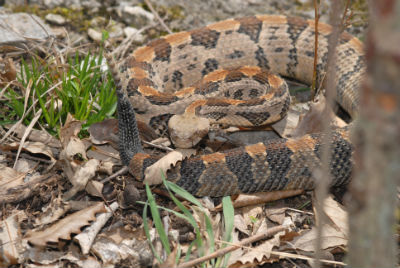 The state of Virginia has dozens of different species of snake, most of them completely harmless to humans or pets. Many of them are elusive and rarely found, seen mostly in grassland and perhaps basking on concrete slabs. However, three are venomous and can cause serious damage to yourself, your family members, and any pets you may have. Knowing how to remove them safely and effectively is crucial to ensure you are not in danger.

If you spot a venomous snake inside your property, it is imperative that you go nowhere near it. Whilst they never attack unprovoked, one wrong move could have deadly consequences. Instead, immediately call an animal control service, whether it is a private wildlife control company, like Nuisance Wildlife Rangers, or state-run. They will remove the animal safely, ensuring that no member of your household gets hurt. If you feel your life is directly in danger, another option is to kill the snake. This must be done from a distance, to avoid provocation. Poison is sold in many hardware stores, as are live traps, with dead rodents as bait. It is paramount that you dispose of the snake swiftly and safely, to avoid it getting provoked into a deadly frenzy.

If you know for sure your snake is harmless, you may want to remove the snake by yourself. Live traps are widely available and generally effective. A more long-term solution would be to try and keep exposed areas in the shade, using umbrellas and other solutions. The concrete of your backyard is very attractive to snakes, but only when in the sun. Removing intense sunshine renders the snakes unable to warm up, thus ensuring your property stays unattractive. You can find more information on snake removal here.

With that being said, here are the three venomous snake species found in Virginia:

This venomous snake is found throughout Virginia and is identifiable by its beige stripes. It measures around 50 inches long and is known to occupy dilapidated houses and other buildings. However, the majority of eastern copperheads are found in thick foliage, including pine forests and hedgerows. This means that extra care should be taken around densely wooded areas, as a copperhead may be basking in the sun. If you have stacks of firewood in your backyard, be sure to wear thick boots when walking around, to prevent exposure to snake bites. Keep plants trimmed and in an orderly state, and make sure not to leave food lying around. This may attract rodents, which are the preferred prey to eastern copperheads.

Considerably rarer than the eastern copperhead, the northern cottonmouth is only found in the south-eastern parts of Virginia. These serpents are much longer and wider than the copperheads, with lengths reaching 74 inches. Cottonmouths are semiaquatic, meaning many mistake them for newts or water lizards. Therefore, extra care should be taken around waterways and bodies of water in southeast Virginia. When on the ground, cottonmouths are usually found in lowland swamps and marshes, meaning they are less of a risk to properties. Nevertheless, if you have a backyard with bodies of water or one that is near a body of water, extra care should be taken, especially around the edge of these bodies of water.

Notorious by name, the timber rattlesnake is found in much of the west of Virginia, as well as the far southeast. Its Latin name, Crotalus Horridus, ‘horridus’ meaning ‘dreadful’, tells you all you need to know. These snakes are much the same size as the cottonmouth, with lengths of up to 70 inches. Although these snakes may give their position away thanks to their noisy tail, the reality is they spend much of their time basking in sheltered yet sunny areas. Thankfully, this means if you take precautions you are likely to avoid this deadly snake. Whilst they spend most of their time in dense foliage, they have been known to venture into urban areas, meaning it is not impossible for one to find its way into your property. Shoes when in the backyard are always advised to be worn, and extra care should be taken around sheltered areas.