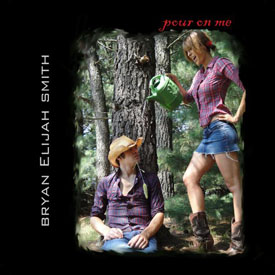 Bryan Elijah Smith is a local artist from Dayton who just released a new self-produced CD, “Pour On Me.” The album’s release party was held at Byers Street Bistro in Downtown Staunton this past Saturday evening.

The party was to begin at 9 p.m. By 8:30 p.m., there was a 40-minute wait to get into the Bistro with everyone wanting to hear the smooth sounds of Smith and his backing band, The Wild Hearts wh,ich include Jeff Miller on the banjo and Jay Austin on the fiddle.

Smith’s sound is a pleasant mix of folk with a hint of blues and rock; the music was very reminiscent of the great Bob Dylan. An interesting thing about this performance was that there was no drum kit, it was simply guitar, banjo and fiddle. In most cases the lack of drums would make people feel as though something was missing from the performance, but not in the case of these three men. The sound filled the restaurant and poured over into the street, where passersby could hear and join in the celebration of the newest CD for Smith.

Only a couple of cover songs were thrown into Smith’s set list on Saturday night; the rest were all originals written by this award-winning musician. By the end of the night, people were dancing and signing along with Smith and The Wild Hearts.

“I’ve been playing instruments since I was 5, but I have made music my career for about two years,” says Smith. “There’s so much I do outside of performing. I work a regular work week with booking shows and producing myself, you always have to think three months ahead.”

Smith has his own recording studio right in his house and has been recording and producing for over six years. This local musician is known all up and down the East Coast.

Reflecting on past shows, Smith says, “My favorite thing about performing is trying to break down the walls people have built and just show them a good time.”

The album, Pour On Me, is on sale for $15. For upcoming shows, and to hear some tracks from the newly released album, check out Smith’s website www.myspace.com/bryanelijahsmith.