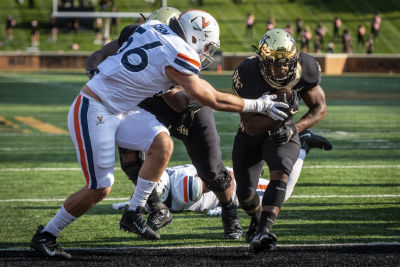 Wake Forest broke a fourth quarter tie with a 75-yard TD TD run by Kenneth Walker III, then took advantage of a special teams miscue to put the game away, on its way to a 40-23 win over Virginia.

It was the third loss in a row for the Cavaliers, who had to fight their way back, again, from a big early deficit.

Wake (2-2) led 14-0 four minutes in, on a 40-yard TD pass from Sam Hartman to A.T. Perry, and a 3-yard TD run by Walker, one play after Hartman had connected with Jaquarii Roberson on a 49-yard pass on a first down play.

UVA actually fought its way back to a 20-20 tie at the break, utilizing a three-man QB rotation to try to account for the loss of starting quarterback Brennan Armstrong, who was held out after being knocked out of last week’s loss to N.C. State with a concussion.

Offensive coordinator Robert Anae rotated Lindell Stone, Keytaon Thompson and Iraken Armstead at QB, and for a half, it worked, as Virginia was able to put together four scoring drives, including TD runs by Armstead and tailback Wayne Taulapapa, and two Brian Delaney field goals.

Delaney would falter, though, on a short third quarter try, his first miss in more than a calendar year, that would have given the ‘Hoos the lead.

After a Nick Sciba field goal put the Demon Deacons back on top, Delaney tied the game with a 42-yard field goal with 13:28 to go.

Walker, who had been bottled up to this point, broke through on the next play from scrimmage, bouncing an inside run to the left sideline 75 yards to paydirt and a 30-23 Wake lead with 13:14 to go.

The ensuing kickoff was a squib kick, and upman Perris Jones muffed the ball, which was recovered by the Deacs’ Kenneth Dicks III at the UVA 28.

Walker scored on a wildcat play from 9 yards out with 11:38 to go to seal it.

A Sciba 44-yard field goal after a Stone INT closed out the scoring.

Walker finished with 128 yards and three TDs on 23 totes.