Should Virginia accept a bowl invite? Breaking down the pros, cons 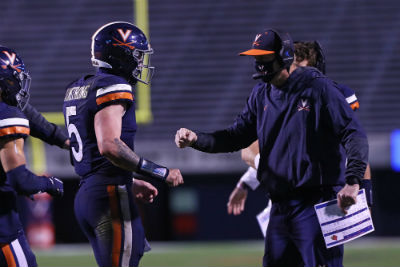 Any other year, it’s an automatic. You ask a college football coach like Bronco Mendenhall, hey, Bronco, want to go to a bowl game, the answer is, a blank stare.

Because, yes, of course, for lots of reasons, and not even that most coaches (most almost certainly being all) have it in their contracts that they get a nice bonus if they take their team to a bowl, that one being personal.

The additional paychecks for the staff aside, you want it for your team – for your seniors to get one more game, for the guys on your two-deep to get another game and more practice reps, for your young guys to get an extra couple of weeks of practice, and an early start on the spring.

This isn’t any other year – yeah, news flash there.

“I think that’ll be program-specific. And I think it’ll be team-specific,” Mendenhall said. “The teams that have fought so hard and want to keep playing and view that as a chance to be together and celebrate one more chance together, absolutely.

“There might be others that view whatever game they might have a chance to play in is not what they hope for. And there might be administrators around the country that, on this given year, don’t know how the finances make any sense.

Let’s do some unpacking here.

Mendenhall has been saying since the spring that the hard work being done to address COVID-19 protocols is being done because his players want to play, and that’s not been more evident than in the past couple of weeks, when the Cavaliers, facing down a lengthy losing streak, sucked it up to get a win over then-#15 North Carolina, then fought through a mid-week postponement of their game with Louisville to get the win over the Cardinals the next weekend.

2020 has been a year like no other for … everybody, but think about being a college football player.

You’re a student-athlete, which means you have classes, and on top of classes, you have practice, and conditioning, film study, some weeks you travel.

You can’t go home, can’t go out to blow off steam.

And if you’re the UVA kids, you’re coming off playing in the Orange Bowl, and you’re 1-4, and you play through it.

If your program gets a bowl invite, that’s a reward, that “chance to be together and celebrate one more chance together,” as Mendenhall laid it out.

I don’t think there’s any question there.

To me, the question is, how the finances work out.

It almost doesn’t need to be said that the economics of bowls will be dramatically different because of COVID-19.

TV has long since been the driver in terms of the bowl season, with ESPN, primarily, using its ever-expanding roster of games as program fodder over the holidays, to put eyeballs of people taking time off before Christmas and between Christmas and New Year’s on the paid messages of advertisers.

The TV money will still be there, but the part of the payouts that you see reported that involves ticket sales largely won’t be.

How does that factor, then, in terms of decisions being made by athletics administrators?

It may be a wash.

Typically, schools have to commit, as part of their agreements to accept a bowl invite, to sell a set allotment of tickets, basically subsidizing the bowl committee.

The reduced payouts that we can expect in 2020 should balance out with the ticket subsidies taken off the books.

You still need to get at least enough from TV to pay for travel, lodging, COVID-19 testing, the bonuses owed to the coaching staff, but as long as that at least evens out, yeah, go ahead, go bowling.

Last words on this: back to Mendenhall.

“There’s a lot of different variables,” Mendenhall said. “You mentioned the protocols, that’s one. The reward, which to me is the most important, if you’d like that as an organization. And then you look at the financial part. So, there’ll be multiple parts, and really all we’re concerned about is this week. So, I’m answering the question, but we’re not focusing on the question.”