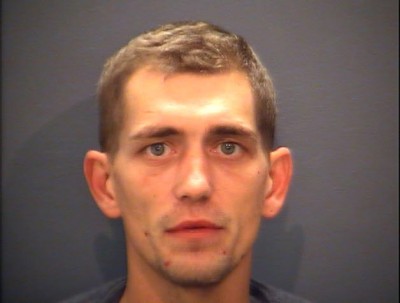 The Waynesboro Police Department arrested a Staunton man on drug and weapon offenses when he and his girlfriend were investigated for shoplifting last Wednesday afternoon.  Gregory Justin Taylor, 31 years old, faces three Waynesboro charges and one Staunton charge after his interaction with police officers at Walmart, 116 Lucy Lane.

Officers responded to Walmart for a report of a couple allegedly shoplifting.  When officers arrived, they detained Olympia Renee Thompson, 22 years old of Harrisonburg, for misdemeanor shoplifting.  The officers learned that her boyfriend, Taylor, was wanted for a capias from Staunton General District Court.  Taylor was in the parking lot when an officer stopped and identified him.  After verifying the existence of the Staunton capias, the officer arrested Taylor.

During their search of Taylor, he admitted to having a syringe and marijuana smoking devices in his pants pocket.  Officers found two smoking devices, a syringe and $65 in his pants pocket.  After seizing these items, Taylor admitted that he had several hundred dollars tucked away in his underwear.  The officers found $800 hidden in his drawers.  In another pants pocket, officers found plastic baggies with a white crystal substance.  In yet another pocket, a set of brass knuckles were found by officers.  When questioned about these items, Taylor gave several explanations including that the pants he was wearing were not his but a friend’s who loaned them to him.  The white crystal substance tested positive for methamphetamine.

Thompson was charged with petit larceny and released.  Taylor faces the following charges in Waynesboro in addition to the Staunton capias:

He is being held on bond at Middle River Regional Jail.