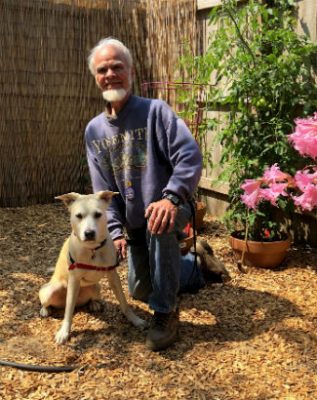 A dog named Bella, played by a real canine and not computer-generated, is the main character in the film “A Dog’s Way Home”,  which is now available on DVDs. The maker of this new 2019 film also made the popular, award-winning film “A Dog’s Purpose”. Both are exciting and informative family adventures, with rave reviews.

Bella–Spanish for “beautiful”–was raised by cats, whom she later helps feed and protect. They make a loving family, embodying playfulness as well as presence, restraint, and wisdom. Emotional scenes occur between Bella and her humans, cats, and other friends. The film reveals how dogs might think.

Bella is on a quest to “Go Home!,” she keeps reminding us as she goes on a 400-mile adventure into the wilderness.  On her epic journey, Bella meets “Big Kitty,” whose mother was killed by a hunter. We later learn that “Big Kitty” is a cougar. Bella becomes her “Mother Cat” and adopts her.

The film has touching scenes of human-dog contact, including playing together and the messes that dogs can make. It evokes both laughter and sadness. Bella experiences both kind and unkind people, including dogcatchers. Her protection from a mean dogcatcher includes military veterans who work at a veteran’s hospital. They back down the dogcatcher who has been trying to capture and eliminate her. She is a vital “service dog” by nature, which helps people deal with Post-Traumatic Stress. “Bella helps me with the Post-Traumatic Stress that I suffer from,” explains one of her military allies.

An alive dog, a loving human, and nature are the stars of this film. Bella seems to be guided by a higher power, to which she can help us connect. Was it dogs who trained humans to meet their needs, or humans who trained dogs to meet our needs? Dogs — as well as cats, horses, and other animals — can bring so much love into a family.

In my veterans group, we do not consider our issues to be “disorders,” which are hard to recover from. “Moral injury” is a better term to describe them, which indicates a problem that is not terminal. Healing is possible.

My dog Daisie is about the same size as Bella and helps me with  Post-Traumatic Stress, even after these many decades. I took Daisie to the Santa Rosa Veteran’s Center to train her, as well as myself on how to care for her. Like Bella, she seems driven by love and loyalty. I am the “odd man out” in my family of origin; I find my deepest companionship with dogs, redwoods, oaks, berries, and other wild things on the Kokopelli Farm where I have lived for nearly 30 years.

Fortunately, according to the film, “Dogs have faith in us.” Lucky us!

Dr. Shepherd Bliss {3sb@comcast.net} is a retired college professor. He has mainly farmed for the last 30 years and has contributed to 24 books.