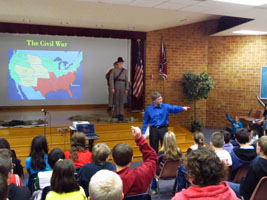 112 North Fork students participated in a program that brought to life the War in the Valley, especially during the fabled 1862 Valley Campaign of Confederate General Thomas J. “Stonewall” Jackson.  The program is the first for the Battlefields organization and will form the core standards of learning elements that can be transported to other interested schools in the area.

At today’s gathering, interactive skits engaged the students with troops from the 10th Virginia Volunteer Infantry, a local reenacting group, in “The Life of a Soldier”.  A presentation provided an overview of the War in the Valley, and how the famous campaign of 1862 was a key element.  Another skit “Civil War in the Valley” was interpreted by local residents to show life on the Widow Pence Farm on the Cross Keys battlefield in Rockingham County.

“We are excited at this opportunity to bring dynamic living history into the classroom, to interact with students, and help them understand how the Civil War affected not only the Shenandoah Valley but the nation as a whole – as told by the soldiers and civilians who lived it”, commented Denman Zirkle, executive director of the Shenandoah Valley Battlefields Foundation.  “While this program serves as our pilot program within public schools, we look forward to entertaining invitations to introduce similar programs in other schools within the eight-county National Historic District, Zirkle added.”

The Battlefields Foundation is a non-profit organization that seeks to protect Civil War battlefields in the Valley, while informing Valley residents, students, and visitors of the significance of the battles that took place here.

For information on how a school can participate in this program, contact Terry Heder, director of interpretation and field programs, at info@svbf.net.