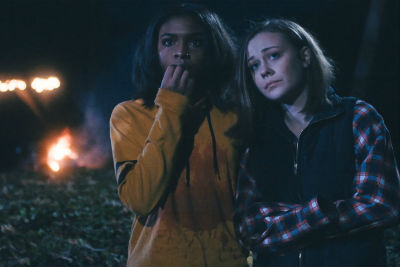 “GetAWAY,” the low-budget horror flick co-produced by The Film Studio at Shenandoah, will get a big-screen debut at The Alamo Drafthouse Cinema in Winchester this month and a DVD/Blu-Ray release in December.

Gravitas Ventures, a Red Arrow Studios company, has picked up North American digital and video-on-demand rights to the indie horror flick. The film was written and directed by Blayne Weaver (“6 Month Rule,” “Cut To The Chase”) and produced by pro cinematographer Chad McClarnon (“Daddy’s Little Girl”) and Paul DiFranco of The Film Studio at Shenandoah (“Santa Girl”).

Weaver’s company Secret Identity Pictures will retain domestic theatrical rights with plans for a limited release to theaters and drive-ins this fall.

“Getting distribution for ‘GetAWAY’ is such a huge accomplishment for The Film Studio at Shenandoah, the film department, and the university,” said Weaver, who is also director in residence for Shenandoah’s film program. “This film wasn’t made like ‘Santa Girl,’ with a budget and name-actors from Los Angeles. This film was shot on a super-low budget and stars student actors from the Shenandoah Conservatory. Getting this film a theatricial, DVD, Blu-Ray and digital release is a huge accomplishment that everyone at Shenandoah should be proud of.”

The movie tells the story of young actress Maddie, who needs a getaway from campus to help mend her broken heart. Her best friend lands her a role in the student slasher flick shooting over the weekend at a camp deep in the Virginia forest. It’s the perfect place to unwind. However, before the film’s crew can shoot their first frame, their production gains an unwelcome new crew member who is out for blood. Props go missing, equipment is stolen, and the bodies pile up. The cast and crew turn on each other as they fight for their lives trying to escape the slaughter while the bloodthirsty psychopath shoots each grisly demise for his own perverted movie.

Described as a terrifyingly twisting meta-slasher film-within-a film-within-a-film, “GetAWAY” will keep audiences guessing until the end.