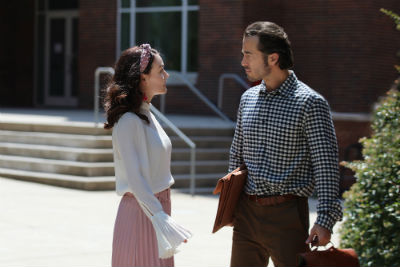 Filming has started on “A Cupid For Christmas,” a romantic holiday comedy that will be co-produced by Shenandoah University and the Los Angeles-based Capital Arts Entertainment.

The movie features 20 Shenandoah students, the majority of whom recently graduated, who will star alongside Hollywood actors Richard Kind, Melanie Stone and Ryan Carnes. Eleven Shenandoah students make up the film’s crew. Leading the project are Director Blayne Weaver, who serves as Shenandoah’s director in residence, and veteran producer/music supervisor Paul DiFranco, who is a distinguished adjunct assistant professor at Shenandoah Conservatory and director of Shenandoah’s film studio.

The movie tells the story of Cupid, played by Kind, who never gets a day off — not weekends, holidays or Christmas, but this year he is ready to retire from the love business and get a proper Christmas holiday. His protégé Ruby, played by Stone, is next in line to take over, but Ruby has repeatedly shown herself to be too emotional and her love-connection numbers are way down. Cupid agrees to give her one last chance to prove herself: He has found the most romantically hopeless person on earth, played by Carnes. If Ruby can find love for him by Christmas day, she gets the promotion and Cupid gets his holiday.

Kind has starred in numerous TV series, including “Mad About You,” “Spin City,” “Young Sheldon” and “Curb Your Enthusiasm.” His movie roles are countless, including those in “Bombshell,” “Argo,” and “Inside Out” (voice). Stone is an actress and producer best known for the Mythica movies: “Mythica: A Quest for Heroes,” “Mythica: The Godslayer” and “Mythica: The Iron Crown.” Carnes, starring as Charlie, has spent 16 years playing Dr. Lucas Jones on “General Hospital.” He has also made appearances on the TV series “Desperate Housewives” and the movie “Letters From Iwo Jima,” among others.

Blayne Weaver, who serves as the director for “A Cupid For Christmas,” is Shenandoah’s director in residence. Weaver wrote, directed and starred in the award-winning thriller “Cut to the Chase” (with Lance Henriksen) and the acclaimed romantic comedy “6 Month Rule” (alongside Martin Starr, Natalie Morales and John Michael Higgins). Previous films he’s written and directed include “Weather Girl” (with Mark Harmon, Jon Cryer and Jane Lynch) and “Outside Sales.” He also co-wrote and acted in “Manic” (with Don Cheadle, Joseph Gordon-Levitt and Zooey Deschanel), which premiered at the Sundance Film Festival. To date, he has written eight feature films.

Weaver also directed “Santa Girl” — the first film co-produced by Shenandoah University and Capital Arts. In 2017, DiFranco — who has been music supervisor for Universal Studios, Sony Pictures and Queen Latifah’s Flavor Unit — paired with Mike Elliott, owner of Capital Arts Entertainment, to bring “Santa Girl” to Shenandoah. The movie showed in nine cities, including Los Angeles and Washington, D.C., and is available on Netflix.

Because of its strict COVID-19 protocols, “A Cupid For Christmas” is the one of the first full-length feature films to receive approval from the Screen Actors Guild (SAG) to be filmed in Virginia. All crew and actors are tested three times a week for the virus, with their tests administered by a nurse and physician assistant from Shenandoah University. Turnaround for results is 24 to 36 hours. Once on set, all actors wear face shields or masks until their scene. Crew members must wear masks at all times.

Filming, which will be wrapped up around Aug. 10, will take place on campus, including at the Smith Library and the Brandt Student Center, and at locations around Winchester, such as the George Washington Hotel.