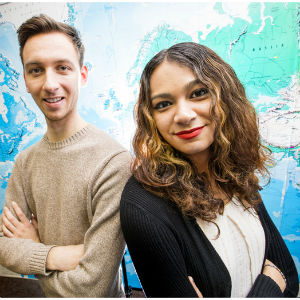 The Fulbright Program was created in 1946 to promote healthy relationships between countries and better understanding between cultures. There are two types of Fulbright Awards for students. The first is the Study/Research program, where applicants carry out a research project in another country. The second is the English Teaching Assistant program, where students teach English and emphasize cultural engagement. Awardees in both categories are fully funded to study or teach in the country of their choosing for about a year.

“A Fulbright is an extraordinary honor,” said Vice President for Academic Affairs Adrienne Bloss, Ph.D. “I could not be prouder of or happier for Drake and Niulka. This award is a tribute to their hard work and talent and to the creativity and impact of their proposals. The Fulbright Study/Research and English Teaching Assistant programs are both very competitive, and the Netherlands and Argentina are among the most sought-after destinations.”

Stoughton and Marin are the first recipients from Shenandoah undergraduate programs to earn a Fulbright at Shenandoah, but they are not the only individuals to have received the honor. Hannah Standiford ’17 was a Shenandoah music therapy graduate student when she won a Fulbright to study Indonesian music last year. She applied for the program through her undergraduate school, Virginia Commonwealth University.

The application process for the federally funded program is so meticulous and difficult that students have to start working on it almost a year in advance. The application involves a personal statement as well as a statement of their planned research or cultural project. All of this must be done in two pages or less.

Karen Abraham, Ph.D., P.T., dean of the School of Health Professions, helped in the early stages of the program while serving as the university’s fellow for academic excellence, and Jonathan Noyalas ’01, M.A., director of the McCormick Civil War Institute, assumed the role as Shenandoah’s Fulbright Program adviser in spring 2017. He worked closely with Stoughton and Marin, assisting them in writing their statements and guiding them through the process. He noted that successful candidates must possess certain qualities.

“These students not only have be strong academically, but they have to be well versed in the culture and language of the country they will visit,” Noyalas explained. “They have to be extremely self-motivated, because they are going to be doing this on their own, so they’re not going to have a whole bunch of professors saying they should be doing ‘this.’ They also have to be extremely independent. They’re going to be living and working in a foreign country for quite a long time away from parents, family and friends. So, it takes a special kind of person.”