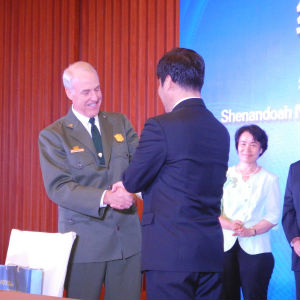 Shenandoah National Park and Baihuashan National Nature Reserve in China formalized a sister park arrangement at an official ceremony on July 4 in Beijing. The arrangement outlines the commitment from both parks to foster international cooperation in preserving these protected areas.  Secretary of the Interior Sally Jewell was present to witness the signing of the arrangement by Shenandoah National Park Superintendent Jim Northup and, Baihuashan National Nature Reserve Director Liu Dong.

The aims of this sister park arrangement are to strengthen exchanges and share lessons learned in resource conservation, planning and construction, and science advocacy and management.  The two protected areas hope to learn from and exchange with each other advanced experience and practices, as well as to enhance the management and protection capabilities of the Park and Nature Reserve.

Shenandoah National Park and Baihuashan National Nature Reserve share many similarities: both belong to forest ecosystems; both are located about 70 miles west of their nation’s capitals.  They have similar mountain, rock, forest, and landscapes. Both parks have beautiful natural landscapes and rich history, cultural relics, and legends. Due to their similar geographical locations, the two areas also share similar responsibilities for eco-tourism and science advocacy.

Superintendent Jim Northup, Chief of Interpretation Matt Graves and Chief of Natural and Cultural Resources Jim Schaberl represented Shenandoah National Park in China.  In addition to the signing ceremony; there was an all-day workshop with the Baihuashan staff, a challenging hike in the Reserve which included Secretary Jewel, a meeting with tourism officials from Brand USA and Capital Region USA promoting tourism to national parks, and a visit to several World Heritage Sites, including the Forbidden City and the Great Wall.

Park staff also represented the National Park Service at an Independence Day Celebration held at the US Embassy in Beijing (attended by 1500 diplomats from all over the world).  The celebration was entirely dedicated to America’s National Parks and the upcoming Centennial.  Max Baucus, the US Ambassador to China and Secretary Jewell both spoke about the importance of national parks in our nation.

Park Superintendent Jim Northup stated “These international relationships are important to the global conservation movement.  We have a wonderful opportunity to learn from each other and build greater good will between our countries”.

Shenandoah National Park will be working on an “Action Plan” for implementation of the Sister Park relationship, which will focus initially on helping the Reserve improve their natural resources inventory and monitoring program and their interpretive and education materials for visitors, and provide advice on trail design.

The trip for National Park Service staff was paid for primarily by the South-North Institute for Sustainable Development in China.