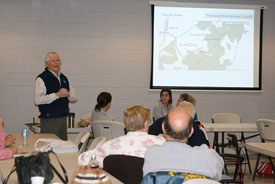 James Lawson of Elkton, who is a noted historian, presenter for the JMU Lifelong Learning Institute, and a master naturalist, paid a visit to the East Rockingham Senior Center on Jan. 25 to share his knowledge about the development of the Shenandoah National Park.

For the 29 members and 10 guests/volunteers in our audience, we learned that the Park was developed by five companies and that the CCC boys actually just assisted with roadway preparations.

Mr. Lawson told us about the many myths surrounding the ‘mountain’ folk who were moved from the Park, including one that claimed many were uneducated or illiterate and that some practiced intermarriage, all of which he emphatically stated were unfounded. Many of the landowners were highly educated or skilled. He said William Randolph Barbee, one of those removed from the Park, was an extremely talented sculptor whose works have since been made part of the Smithsonian Institute, as well as having a statue in his honor in the town of Luray. Yet another, Robert Via, is noted for fighting the government’s takeover of his property all the way to the Supreme Court and nearly winning his case.

Mr. Lawson pointed out that the reason the Shenandoah National Park was created was due to greed, ambition and money. Having relatives on his mother’s and father’s side of the family who did own property in the boundary at the time of the takeover, Lawson said he vividly recalls his mother’s displeasure of the ordeal as she spoke about it during his childhood years.

As part of his presentation, Lawson also used a slideshow depicting the wildlife, plant life and other historical artifacts and also passed some merkles (mushrooms) and bean plants throughout the audience. His hour long talk generated lots of comments and questions from the audience as many of the East Rock SC members had family members who were affected by the manner in which the Park was developed, and many were eager to speak individually with Mr. Lawson prior to his departure.

A representative from The Valley Banner also was present and took a photo of several Center members and Mr. Lawson.