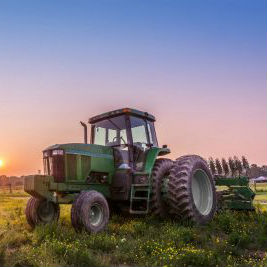 A cool spring and abundant rainfall has resulted in a bumper crop of hay in the fields of Piedmont Virginia. As the first cutting is being harvested, area farmers are using local roads and primary highways to move between properties on their tractors, often pulling hay balers, mowing attachments or other equipment.

This slow-moving equipment presents motorists with unusual and perhaps unfamiliar hazards. Most of the equipment is moving at a slow speed, so drivers may run up on the equipment more quickly than vehicles that are traveling at or near the speed limit. It is easier to misjudge distance and closing speed when approaching slow-moving vehicles such as tractors.

Since farm equipment is designed for the most efficient use in fields or other off-road uses, some machinery is wider than a standard lane. Other pieces of equipment have protruding arms, wheels and blades.

In some areas roadway signs warn of agricultural equipment on the roads or that equipment may cross roads at certain places. While those signs designate some areas, heavy agricultural uses across the region mean that drivers may encounter farm equipment on almost any road, including major highways such as U.S. 29, 33 and 522. Motorists should watch for equipment displaying flashing amber lights and the red reflective triangle displayed on the back of slow-moving vehicles.

The Virginia Department of Transportation is working with local Farm Bureaus and other agricultural groups to raise public awareness of the farm equipment moving on state roadways.

Andy Hutchison, president of the Orange County Farm Bureau, said farmers are always aware of the effect their slow-moving equipment has on other road users. He said that farmers don’t want their equipment to be an obstacle, but it is not always safe for them to immediately move to the right to let other vehicles pass. “Please don’t pass us on double yellow lines. We will pull over to let cars and trucks pass at every available opportunity.”

The Virginia Farm Bureau Federation has more information about slow-moving agricultural equipment on roadways on its website:vfbarticles.personifycloud.com/news-and-features/categories/farmers-urge-drivers-to-practice-patience-during-planting-season