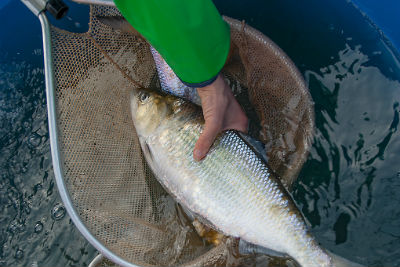 Millions of dollars have been spent to restore the American shad’s Atlantic population. (Bay Journal photo by Dave Harp)

The American shad’s Atlantic population remains at a historic low, despite longstanding commercial fishing bans in several states and millions of dollars invested in restoring its spawning habitat in rivers and creeks.

That sober news comes from the most comprehensive survey yet of the species’ status on the East Coast and the first of any kind in 13 years. The sprawling assessment by the Atlantic States Marine Fisheries Commission designates the shad population as “depleted” from Maine to Florida.

“There should be a lot more shad than there are out there,” said Michael Bailey, a U.S. Fish and Wildlife Service scientist and one of the assessment’s authors.

In the Chesapeake Bay region, the study suggests that the rate of death among adult shad — a key measure of a population’s health — is high enough in the Potomac River to declare the population “unsustainable,” but not so in Virginia’s Rappahannock and York rivers.

Once one of the largest commercial fisheries along the coast and around the Bay, shad catches have bottomed out at about 1% of their late-1800s levels. Although the shad fishery has all but disappeared in the Chesapeake, scientists contend that the species serves a critical ecological role in the estuary as a vital link in its food chain.

But shad are an anadromous species, meaning they spawn in freshwater rivers but spend most of their adult lives in the ocean before returning to their native river to reproduce when they are 4 or 5 years old. Because shad rely on so many different habitats, they face a barrage of challenges through all stages of life.

The species’ continued struggles are mostly blamed on the amount of potential habitat blocked by dam construction, a loss of about 40% of its historic range. But shad also face threats from climate change, polluted water, deadly run-ins with hydroelectric turbine blades and getting eaten by larger fish.

The Marine Fisheries Commission, which regulates migratory fish in state waters along the Eastern seaboard, is grappling with whether more actions are needed to buoy the stock. The commission’s shad management board tasked a scientific panel Aug. 4 with recommending potential measures.

Fishery managers have been pulling regulatory levers for decades to help shad rebound but with little progress to show for it.

Commercial landings plummeted from about 50 million pounds at the beginning of the 1900s to 3.8 million coastwide by 1980. That year, Maryland imposed a moratorium on shad fishing. The Potomac River’s regulators followed suit in 1989; Virginia closed its rivers to shad fishing in 1994.

Ocean catches have been largely prohibited since 2005, but the new assessment finds no evidence that the action has breathed new life into the population.

While fishing was cut back, massive efforts were undertaken to boost the population. Pennsylvania, Virginia, Maryland and Delaware launched hatchery operations to rear shad for release in their rivers. Hundreds of millions of larval shad “fry” have been stocked in recent decades.

Meanwhile, major efforts were made to reopen historic spawning areas to fish returning from the sea each spring. Since the early 1990s, tens of millions of dollars have been spent opening more than 1,000 miles of Bay tributaries to migrating shad. Where possible, dams have been removed, but most of the reopening has been achieved through the construction of fish passages. Research has shown, however, that most shad are unlikely to use those constructed passages.

Although scientists have made significant strides in monitoring shad, they were unable to assess for the 1,200-page report whether or not the coastwide population’s adult death rate shows it to be sustainable. At a smaller scale, they were confident enough to make a call for eight of the 23 river systems they studied — with three being declared as unsustainable (the Connecticut, Delaware and Potomac) and five as sustainable (the Hudson, Rappahannock, York and Neuse, as well as Albemarle Sound).

Some fishery experts were caught off guard by the report’s bleak assessment of the Potomac population. By 2014, shad abundance there had surpassed the goal set by the Chesapeake Bay Program, the federal and multi-state effort that manages the restoration of the estuary.

After gaining in size until as late as 2005, the Potomac shad stock has leveled off, according to the Marine Fisheries Commission report. Fishery scientists aren’t sure why that is happening, but they think young shad might be being eaten by the region’s rising numbers of invasive species, such as blue catfish and snakeheads.

“Predators can have a disproportionately large impact on year class success when fish populations are at such low levels, as is currently the case,” wrote a scientific panel tasked with reviewing the assessment.

Scientists suspect that the Potomac’s shad troubles may also lie elsewhere — in the Atlantic. Larger fish may be eating them at sea. They also may be falling victim to bycatch — commercial fishing that unintentionally kills fish other than the targeted species.

Uncertainty is a common theme in the report. For instance, while adult mortality is monitored, there is “almost no information” collected about young shad, Bailey said. That knowledge gap prevented the report’s authors from determining whether the fish’s coastwide death rate is at acceptable levels. They tied their “depleted” characterization to a sharp decline in coastwide landings since the 1950s and a lack of clear evidence of a rebound.

The fish tend to return to spawn in the rivers where they hatched, but those individual populations are thought to become mingled at sea. The sea connection will become increasingly vital as climate change warms the ocean, prompting shad to either die off in lower latitudes or “hopscotch” their way northward to more hospitable waters, said Karin Limburg, an ecologist at the State University of New York in Syracuse.

One of the biggest steps that fishery managers can take is to open the Susquehanna River to shad migration, even if it means “taking down” the Conowingo Dam, she said. The existing passages at the dam and elsewhere aren’t moving enough fish upstream. The river hosts the largest untapped spawning ground for the fish on the East Coast. The dam’s owner, Exelon Corp., is working on a deal that would allow the company to continue operating it for the next 50 years.

Jeremy Cox is a Bay Journal staff writer based in Maryland. You can reach him at jcox@bayjournal.com. This article was originally published in the Bay Journal and was distributed by the Bay Journal News Service.