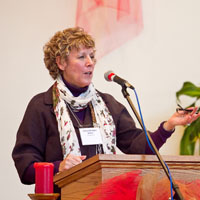 Where is the Holy Spirit working today? The nearly 200 people attending the annual School for Leadership Training at Eastern Mennonite Seminary, Jan. 17-19, 2011, heard Cheryl Bridges Johns, a professor and pastor from Cleveland, Ky, explore the theme, “The Work of the Holy Spirit: Pentecost Remixed.”

Johns, a member of the Wesleyan-Pentecostal faith, spoke about the ongoing work of the Spirit in the world today. Johns preached at Monday evening’s worship service and provided plenary input on Tuesday and Wednesday morning.

“The work of the Holy Spirit has been overlooked in many Christian circles,” said Johns, “or, as in my denomination, it has been pigeon-holed into one or two areas.”

Johns encouraged the participants to think about the feast of Pentecost described in Acts 2 as a continuing and not a one-time event. It occasionally happens in Pentecostal churches today, but, Johns said, “the Holy Spirit doesn’t have to interrupt because it is working daily in the world.

Johns also suggested why Christians sometimes resist the Holy Spirit. “Pentecost is a festival of deconstruction,” she said “We don’t like to lose our individuality and our ability for control. As in Acts 2, the Holy Spirit causes us to lose control.

Part of this loss of control, according to Johns, has to do with speaking in tongues.

“Language is the last hiding place of the self,” she said. “When I give away my language I am exposed.” However, she continued, speaking in tongues is also a redistribution of knowledge.”

“Cheryl helped us see that removing the Spirit from the world has contributed to a divide between the theological academy and congregational life that can create unedifying categories of ‘educated’ and ‘uneducated,’” said Brian Gumm, a student in the seminary and in the Center for Justice and Peacebuilding.

“The Spirit acts as the mighty and unpredictable leveler,” Gumm continued. “In the Spirit, professors and peasants together speak with the tongues of angels, joyfully worshiping and serving God in word, song and deed.” Wednesday evening, seminary dean Michael A. King preached at the closing worship session on the topic, “Toward Becoming more Daring in the Spirit.” King described how a mentor encouraged him to live without a map, when he was in the midst of a mid-life crisis in his 40s.

“Your maps, your plans for where and how you’ll go are the essence of responsible functioning. But my mentor encouraged me to give up not only things like plans but even view of self, ways of making sense of life, doctrines locked in as the truth,” said King.

“Living without a map is a way of describing a life guided by the Holy Spirit,” he declared.

King went on to talk about how he learned that this living without a map “sometimes means understanding that God can work through your weaknesses.”

Participants selected from a number of workshops focused on the role of the Holy Spirit in topics ranging from theology and biblical interpretation to the work of the Spirit in the visual and performing arts.

“The diversity of experiences of workshop leaders was wonderful,” said Brian Paff, director of communication at Laurelville Mennonite Church Center, Mt. Pleasant, Pa. “The different voices contributed to the conversation on the Holy Spirit’s role in the life of the church.”

To order CDs and DVDs of School for Leadership Training sessions, contact Learning Resources at Eastern Mennonite University at 540.432.4231 or e-mail kingmg@emu.edu.