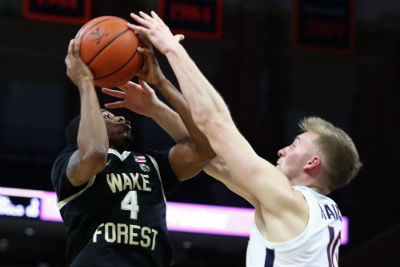 But it was an accelerated defensive effort over the final 20 minutes of play that secured the win for Virginia.

Should we be surprised that it was a defensive effort that saved the day for the Cavaliers?

This year, so far, actually, yes.

Last season, Virginia had just enough offense to find a way to win games. This season, in a start-and-stop year, the Cavaliers when winning have seemed to find just enough defense.

The Cavaliers limited Wake Forest to just 22 second half points on just over 38 percent shooting. This coming off a torrid first half effort by the Deacons, who connected on five of their first six three point attempts and closed the break hitting 15-of-24 overall from the field.

Wake Forest held as much as a 13-point advantage early in the contest before Virginia closed to within five at the break.

Wake entered the game near the bottom in the league in three point shooting, but connected on its first four treys to aid in building the double-digit lead.

Virginia forced seven second-half Wake turnovers and limited the Demon Deacons to just eight of 21 from the floor.

“We knew we were going to have to come together,” Bennett said. “I thought we had a very spirited week of practice.

When asked about the tragic events that took place earlier in Washington, D.C., at the U.S. Capitol, and the effect it may have had on this team, Bennett explained:

“Obviously with the events that happened today, there was a lot of stuff going on, but we talked about it, and said let’s just go out and take a step in the right direction.”

Hopefully with the Cavaliers second half defensive shutdown of Wake Forest they did just that – took a step in the right direction.