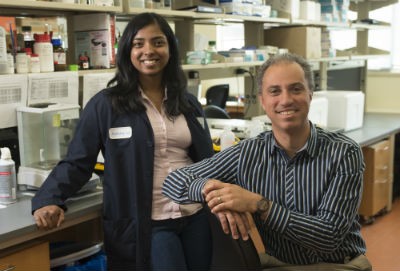 Saline solution is a staple of every hospital. No matter the ailment, doctors have known for more than a century that saline is key to keeping patients hydrated and maintaining their blood pressure levels. But the solution could do more, according to Steven Poelzing, an associate professor at the Virginia Tech Carilion Research Institute.

Sudden cardiac death occurs when the normal electrical conduction pattern of the heart is interrupted, and it’s a significant cause of death in many groups, particularly young athletes.

Poelzing’s team recently published a paper on how the components of saline solution affect cardiac conduction in the European Journal of Physiology.

“Scientists and clinicians know that when your heart gets sick, gap junctions become uniformly downregulated,” Poelzing said. Gap junctions are connections between neighboring heart muscle cells that help synchronize electrical activity across heart tissue. “They start to disappear until the heart stops working. Gap junctions connect cells, transporting information and conducting electrical current – which is carried by charged mineral ions such as sodium, potassium, calcium, or chloride, dissolved in solution. If you block the gap junctions, conduction slows, but there’s not a magical threshold for sudden cardiac death.”

Previous studies in Poelzing’s laboratory showed that even halving the number of gap junctions didn’t change the rate of conduction. Rather, Poelzing’s team found, mineral levels are responsible for quickening or slowing cardiac conduction. Saline solutions vary by the maker; one may have a little more sodium or a little less potassium. Those slight modifications can add up to big changes.

In 2011, Robert Gourdie, now a professor at the Virginia Tech Carilion Research Institute, discovered a pocket near the gap junctions between cardiac cells full of pores that preferentially allow the passage of sodium ions. Poelzing and his team hypothesized that by changing the ratio of sodium, potassium, and calcium ions in their solution, they could reduce the size of the pocket, and the electrical current could jump the cleft between cells quickly, speeding the rate of conduction. They were partly right.

“One sodium solution would speed conduction, but another solution with the same amount of sodium would slow conduction,” Poelzing said.

His team made 16 different solutions, adjusting for sodium, calcium, and potassium levels and ratios. Sharon George, first author on the paper, said that adjusting the levels even slightly could make a big difference.

“We expected that changing the solution could affect conduction in the heart,” said George, a Virginia Tech–Wake Forest School of Biomedical Engineering and Sciences doctoral student who works with Poelzing at the Virginia Tech Carilion Research Institute. “But the effect of such small changes in individual concentrations was surprising.”

The wrong mix of events could lead to major heart problems, according to Poelzing. He said a key step in the fight against issues like sudden cardiac death is to consider changing the solutions used in ambulances and hospitals.

“Often, the first thing they do for a medical procedure is hook you up to a bag of saline,” Poelzing said. “It’s okay – it’ll get your blood pressure up. But what if that bag could be optimized? What if it could be designed to prevent sudden cardiac death?”

A prescription for personalized care could indeed lead to improved health and perhaps even preclude sudden and major cardiac events – all by slightly adjusting that little bag of saline.